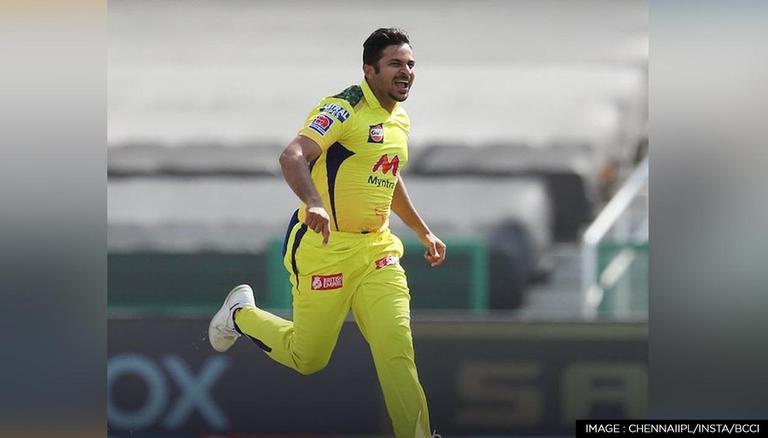 
Chennai Super Kings (CSK) bowler Shardul Thakur starred against Kolkata Knight Riders (KKR) on Sunday by chipping in with two important wickets for the team. During the Indian Premier League (IPL) match played at the Sheikh Zayed Stadium, Thakur first dismissed KKR’s in-form opener Venkatesh Iyer for 18 runs, in the last over of powerplay in KKR’s innings. He then came back to the bowl for CSK at the death and dismissed Caribbean big-hitter Andre Russell.

Thakur finished his quota of four overs with 2 wickets to his name, conceding only 20 runs. Following CSK’s classic display of bowling, KKR managed to set a target of 172 runs for CSK, which was chased down by them in a last-ball thriller. Meanwhile, upon witnessing Thakur’s sensational bowling against KKR, the Indian cricket fans were all praises for ‘Lord Shardul’. Shardul Thakur earned himself the tag of ‘Lord Shardul’ after his performance during India’s tour of Australia in the 2020-21 season.

A user said that this is the world of ‘Lord Shardul’ and we are all just living in it. He further added that Thakur provides important breakthroughs and said that he has the arm of God. Another user reacted to Thakur’s bowling by posting a blank picture and hilariously captioned the tweet, saying that it is the list of tips on how to play Thakur’s bowling.

This is not a joke anymore. It's Lord Shardul's World and we are all living in it. Always provides important breakthroughs. The ARM OF GOD. 😳😭#CSKvsKKR @ChennaiIPL pic.twitter.com/0k7YTAXu8o

Here is a list of few tips how to play Lord Shardul pic.twitter.com/jxQswQTG0T

One of the users, citing Thakur’s deliveries to dismiss Iyer and Russell, said that Thakur always steps up whenever the team is worried about an explosive and dangerous player from the opposition. Another user mentioned the bowler’s blank reaction after dismissing Russell.

#CSKvsKKR
Kohli/Dhoni: Guys this is most important and explosive player, who can get him?
Lord Shardul: pic.twitter.com/bG08X9lY6S

The look as if to say to Russell, how dare you try to Hit the Lord. #CSKvsKKR #LordShardul @ChennaiIPL pic.twitter.com/NAnf2JQNGx

Among the many reactions, one of the users mentioned Iyer’s decision to review his dismissal by Thakur, which looked like a clearly right decision by the umpire, and said that Iyer reviewed it to watch himself getting out in slow motion. Another user called for Thakur’s inclusion in the Indian squad for ICC Men’s T20 World Cup. The user added that Thakur deserves a place in the Indian playing XI for the World Cup.

Iyer reviewed it to look how Lord Shardul got him out in slow motion. Moments you live for. #IPL

Lord shardul deserves a place in t20 wc xi who is agree with this? pic.twitter.com/pA6dj9BFAc