KL Rahul after the loss in the Royal Challengers Bangalore vs Punjab Kings match, speaks about the area which has let down Punjab Kings in the past few years. 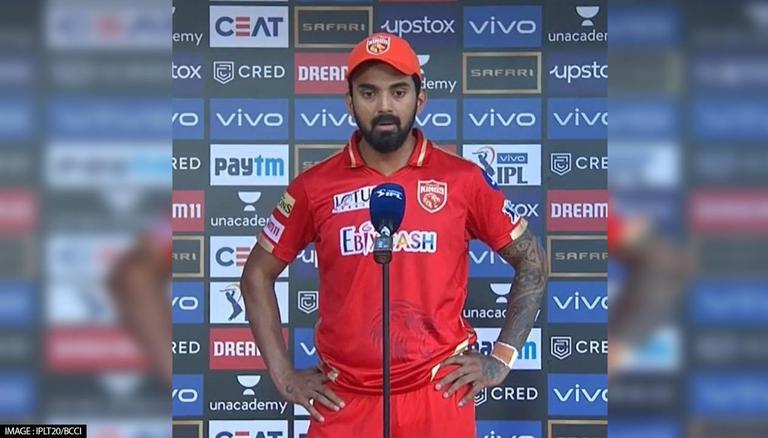 
Following the defeat against Royal Challengers Bangalore in the ongoing IPL 2021, Punjab Kings skipper KL Rahul said that the batting unit of PBKS has let the side down significantly in the past couple of years. During the post-match interview on Sunday, Rahul spoke about the team's loss and pointed out that they lacked a batter in the middle order who can chip in with quick runs at the end of the innings. RCB defeated PBKS at the Sharjah Cricket Stadium by 6 runs, after posting a target of 165 runs and then restricting the PBKS for 158 runs at the loss of six wickets. KL Rahul also spoke about  Mayank Agarwal, praising him for scoring 34% runs for the team by adding that it definitely plays on his mind when he comes out to bat.

We have missed someone in the middle who scores those 30-40 quick runs: KL Rahul

Rahul added that in the T20 format of cricket, the majority of the runs are scored by the top-order batters since middle-order batters do not score 500 or 600 runs in a season. While speaking to Star Sports in the post-match interview about the middle order, PBKS skipper, KL Rahul said, "In T20, the top two or three do score a bulk of the runs. You won't have people in the middle order scoring 500-600 runs. But we have missed someone in the middle who scores those 30-40 quick runs". The PBKS skipper has been sensational ever since he joined the squad in 2018 and in the IPL 2021, he has scored 528 runs in 12 matches. He is also the top run-scorer in the season, ahead of Ruturaj Gaikwad and Sanju Samson. At the same time, Rahul’s opening partner Mayank Agarwal has scored 429 runs so far across 11 matches.

KL Rahul also spoke about the team's performance and said, “I wouldn't say I haven't enjoyed wearing it (the Orange Cap) but I would have been happier if we had qualified. It was a score that was par. Maybe 10-15 runs extra. When a guy like Maxwell comes in with that sort of form, it makes it difficult. But with the bat, the last couple of years have been disappointing. If I have to be honest, our batting has let us down. I'll be lying if I say it doesn't play on my mind that I play a role that the team demands. It's not something that I enjoy, but when you lead the team, you have to accept the responsibility”.

WE RECOMMEND
Chris Gayle 'not being treated right' in Punjab Kings environment': Kevin Pietersen
IPL 2021: Fans laud Virat Kohli as RCB qualifies for playoffs for 2nd season in a row
IPL 2021: KL Rahul hits '101-metre long' six out of stadium off Mohammed Siraj; watch
IPL 2021: Who is Umran Malik? Meet the youngster who clocked 150kmph on debut
IPL 2021: Brian Lara lauds Ruturaj Gaikwad, says "will put him in the KL Rahul category"
Listen to the latest songs, only on JioSaavn.com