Hardik Pandya recently took to social media to share a video, where he along with his wife Natasa Stankovic can be seen dancing to the song Ay Rico Rico.


Mumbai Indians (MI) cricketer Hardik Pandya recently took to social media to share a video, where he along with his wife Natasa Stankovic can be seen dancing to the song Ay Rico Rico with brother Krunal Pandya and his wife Pankhuri Sharma. The couples were twinning for the video as they were all dressed in Justin Bieber's 'Drew' merchandise to show off their "Pandya swag". Hardik shared the video on Instagram last evening and since then it has garnered more than 1.4 million views. Hardik's video also received a comment from fellow Indian teammate Shreyas Iyer, who sent 'raising hands' emojis to appreciate the post. 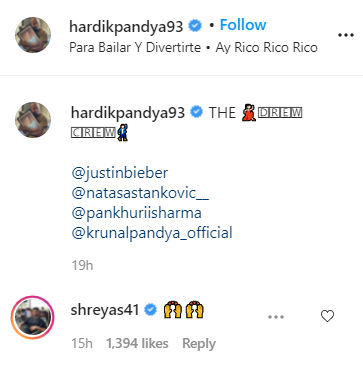 Hardik's brother Krunal also shared a picture on his Instagram handle, where both can be seen posing for the camera in orange drew T-shirts. Meanwhile, Natasa Stankovic shared a post, where all four can be seen dressed in the 'drew house' merchandise and captioned it saying, "The Pandya’s swag". Both brothers are currently staying in Chennai with their wives at the same hotel for the ongoing edition of the Indian Premier League (IPL 2021).

So far in the ongoing edition of the Indian Premier League (IPL), Hardik has not made much impact in any of the games as he has failed to perform with the bat and has been advised by his physios to not bowl because of injury concerns. However, Hardik did contribute in Mumbai's previous game against Sunrisers Hyderabad (SRH), where the Gujarat cricketer run out a couple of players with incredible direct hits. In the three matches that Hardik has played in IPL 2021, the all-rounder has made 35 runs at an average of 11.66.

Meanwhile, Mumbai is slated to play its next game against Delhi Capitals on Tuesday at MA Chidambaram stadium in Chennai. Mumbai has won two out of the three games that they have played so far in the cash-rich tournament, except the one against Royal Challengers Bangalore.