IPL 2021: Who Is Kartik Tyagi? All You Need To Know About The Net Bowler Turned IPL Star 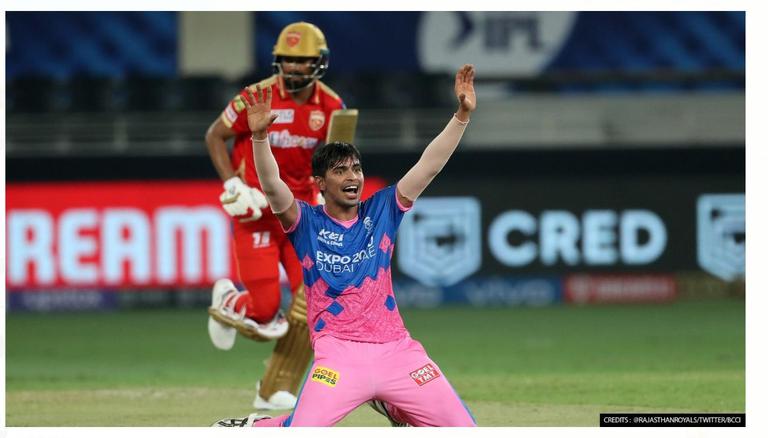 
Kartik Tyagi became an overnight sensation for Rajasthan Royals after he helped his side secure a two-run win over northern rivals Punjab Kings during the IPL 2021 clash at Dubai International Stadium on Tuesday.

Tyagi, who is featuring in his second IPL season for 2008 champions is yet to achieve fame and fortune at the highest level, let's find out who this emerging pacer is.

Who is Kartik Tyagi? How he was bought by Rajasthan Royals?

Kartik Tyagi hogged the limelight during Team India's ICC U-19 World Cup 2020 campaign in South Africa. He finished the tournament with 11 scalps and his best spell was against Australia in the quarterfinals where he had bowled a match-winning 4/24. The Priyam Garg-led side had an excellent U-19 World Cup where they steamrolled into the finals before going down to Bangladesh in the decider.

READ | Special to change game myself after watching others do it: Tyagi

During the IPL 2020 Auctions, the UP cricketer landed an Indian Premier League (IPL) contract with Rajasthan Royals. The inaugural edition winners acquired the cricketer for ₹1.30 crores, i.e. a staggering 6.5 times his base price of ₹20 lakhs. The youngster was impressive in his very first appearance at the marquee tournament as he finished with nine wickets in 10 matches that he got to feature in for the Royals at an average of 40.77 and an economy rate of 9.61.

RR showed faith in Karthik by retaining him for the same price i.e. ₹1.3 Crores during the IPL 2021 Auctions earlier this year. However, the promising bowler ended up missing the first phase of IPL 2021 held in India with an injury, and as per reports, by the time he recovered, the tournament was suspended temporarily due to COVID-19.

Coming back to the young bowling sensation's thrilling final over, RR were defending 185 and with just four runs required from the remaining six deliveries, the onus was on Kartik Tyagi to take his team over the line which he did in style despite having two set batsmen in the middle.

With Aiden Markram on strike, Tyagi bowled a full toss which turned out to be a dot ball and the South African took a single of the next delivery. Kartik then had Nicholas Pooran caught behind for a 22-ball 32 before bowling another dot ball to newcomer Deepak Hooda. The 20-year-old then had Hooda caught behind as the equation came down to 3 runs of the final delivery.

West Indies all-rounder Fabian Allen took strike with the aim of finishing the game for his side but Kartik Tyagi proved to be too good for him as he bowled a yorker outside off-stump which was missed by the batsman as the inaugural edition's winners snatched victory from the jaws of defeat to occupy the fifth spot in the IPL 2021 points table with four wins from eight matches and eight points to their tally.