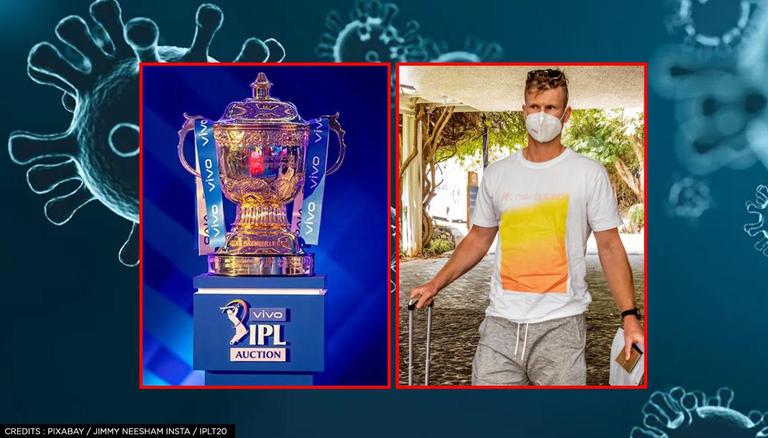 
New Zealand all-rounder James Neesham who currently serving 14 days quarantine period after returning to his country following the suspension of IPL 2021 has pointed to the lapses in the bio-bubble that was created by the BCCI and franchises for the players in order to protect the players from COVID-19. James Neesham spoke to Newshub from his hotel room and outlined how team travel breached the bio-bubble and ultimately led to the suspension of IPL. Neesham also called the decision to suspend the IPL 2021 shocking as he had already expected that there would be some cases during some points of the tournament.

Neesham blamed the team travel for bio-security lapses and said, "Even though we were flying on chartered planes, we have to go through customs, hand your details over to people, walk through terminals, so there were always going to be pinchpoints there. We obviously don't know yet exactly how teams were infiltrated, but it's such a difficult prospect to keep everything perfect and when you've got so many guys that are close to each other, there are going to be social interactions after games. Once one team has it, you start looking back through your last week at who you talked to and who you shook hands with. It certainly gets your mind racing."

The 30-year-old Kiwi all-rounder also said that the decision to suspend the IPL 2021 came to him as a shock as he was expecting that the teams will be in lockdown and miss a couple of games. "To be honest, I wasn't expecting it to get called off. I think, when you've got so many teams in different bubbles, the expectation was that there would always be some cases at some point during the tournament. We thought teams might have to lock down and miss a couple of games, like we've seen in other organisations, like the NBA. The show must go on. The thing that was so shocking was how quickly it came up in so many different teams at the same time and we didn't really have an option in the end."

The Mumbai Indian’s all-rounder expressed his wish to return to India if IPL 2021 resumes despite India is battling against the second wave of COVID-19 pandemic. While talking he revealed, "For me, I signed up for the IPL knowing what it might be like. I felt like it was an obligation – I made the commitment to go and never had any thoughts of pulling out individually before the tournament finished." He further opened up that others might have a different take on the issue, but he believes it is a part and parcel of his job.

James Neesham was picked up for his base price of Rs 50 lakh in the 2021 IPL auction by the Mumbai Indians. During the IPL 2021, he played a solitary game against the Chennai Super Kings in which he sacrificed his wicket to keep Kieron Pollard on strike in the final over.

READ | Is Rahul Dravid an engineer? Fans get curious about India's most educated cricketers

READ | Unmukt Chand denies ex-Pakistani cricketer's claim he is eyeing cricket career in the USA
First Published: 10th May, 2021 16:57 IST
SUBSCRIBE TO US

WE RECOMMEND
Parthiv Patel reveals 'game-changer' for Dhoni's CSK in IPL 2021, it's not Ravindra Jadeja
IPL 2021 suspension: KKR's Sunil Narine, Andre Russell arrive 'safely' in the Caribbean
IPL news: BCCI treasurer addresses rumours finally about hosting IPL 2021 in England
Rishabh Pant created history in IPL on this day in 2018 as he smashed an unbeaten 128
IPL 2021: How much has teams' donation been for COVID-19 so far? Amount surprises fans