Jasprit Bumrah Teases Wife Sanjana Ganesan On His Shirtless Selfie; 'You Selected These?'

During the interview, Jasprit Bumrah was asked by Sanjana Ganesan to respond and reveal stories behind his old photos which he had shared on Instagram handle 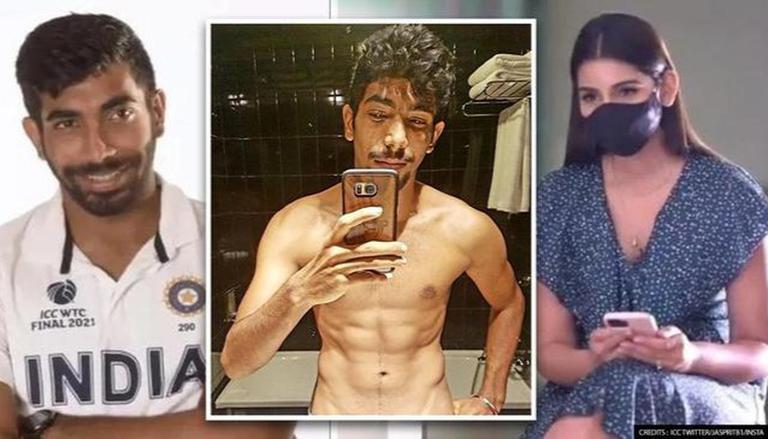 
Team India's speedster Jasprit Bumrah ahead of the first-ever ICC World Test Championship (WTC) Final, appeared for an interview for the International Cricket Council (ICC) which was hosted by none other than his better-half Sanjana Ganesan. During the interview, Jasprit Bumrah was asked to respond and reveal stories behind his old photos which he has shared on his Instagram handle. During the interview, Jasprit Bumrah and Sanjana Ganesan's chemistry was unmissable, however, the Indian speedster did not leave a chance to take a dig at his better half on numerous occasions.

While Jasprit Bumrah was sharing the stories behind his old pictures, the Indian pacer took a dig at his better half, Sanjana Ganesan, when his shirtless selfie popped up during the interview. As soon as Japrit Bumrah's old mirror selfie picture showing his shredded body popped up, Jasprit Bumrah hilariously asked Sanajan Ganesan, 'You have selected this picture?', Sanjana burst into laughter and instantly replies, 'No I have not'.

Bumrah then talked about his shirtless mirror selfie and says, "This is a picture where I was working hard on my body and fitness transformation was going on where I used to tell everyone that I was a baby fat-chubby kid, so after coming to international cricket being at the highest level I realised that I have to change and get fitter. So, this is kind to little bit show-off I guess."

During the fun interview, Sanjana Ganesan shows Jasprit Bumrah their wedding picture. In response, the Indian cricketer funnily asks who the person alongside him is and adds that he feels he has seen her somewhere before as Sanjana bursts into laughter. Bumrah further said that it was the best and the happiest day of his life which just happened recently.

Playing with his sister, starring in school cricket and ‘the best day’ of his life.@SanjanaGanesan takes @Jaspritbumrah93 through some Insta Memories before the #WTC21 Final 🎥 pic.twitter.com/k8FKUxgQJI

Sanjana then asks Bumrah about the moment in the picture where the two are adorably looking at each other. Opening up on the same, the Mumbai Indians star revealed that the two of them were looking at each other all the time because they were constantly laughing and the cameraman happened to click the picture. Speaking about the second picture where the couple is walking and taking the seven vows of marriage, Bumrah said that the photo looks good, the decoration is nice and also jokingly said that the person walking in the front (Bumrah) is also very nice. He also revealed that the caption of their wedding posts was written by Sanjana.