A lookalike of Jonny Bairstow was discovered in the stands while the cricketer was still batting in the middle, and photos of him quickly went viral online. 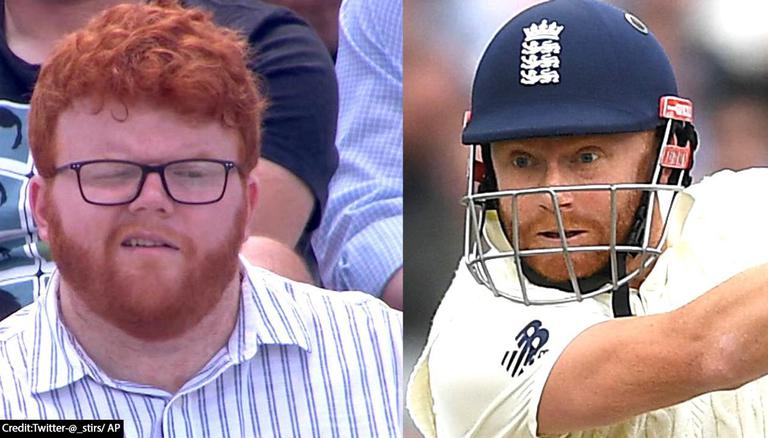 
The first day of the first Test on Wednesday, August 4, between India and England did not go well for the hosts, as Indian bowlers dominated and continued to take wickets at regular intervals. India bowled England out for 183 runs in just 65.4 overs. Captain Joe Root scored the sole half-century for England as the rest fell down without contributing much towards the final score. Dom Sibley, Zak Crawley, Jonny Bairstow, and Sam Curran scored some runs but couldn't breach the 30-run mark.

After losing three wickets for 66 runs, Root and Bairstow forged a crucial partnership and took England to 138 runs before the latter was removed lbw by Mohammed Shami for 29 off 71 balls. After Bairstow's dismissal, England lost the remaining wickets for 40 odd runs as they collapsed for 183 runs. A lookalike of Jonny Bairstow was discovered in the stands while the cricketer was still batting in the middle, and photos of him quickly went viral on social media. The man had the same brown beard and hair as Bairstow, as well as identical facial features to the England batsman.

Jonny Bairstow after seeing his own dismissal..😀😆🤔 pic.twitter.com/3tOgKS7po7

Jonny Bairstow after seeing his own Dismissal 😆😆🤔 pic.twitter.com/r422lzJtv2

Meanwhile, Indian openers KL Rahul and Rohit Sharma managed to prevent their wickets from falling towards the back end of Day 1, when England pitches are considered most dangerous. Both Rahul and Rohit faced around 40 balls and scored 9 runs each to fend away the danger on Day 1. India has assumed batting on Day 2 at 3:30 pm IST and will look to bat the entire first session without losing a wicket. If India manages to bat all day today and continue for a session or two tomorrow, they will definitely emerge the winner of the match.

India is currently batting at 27/0 in 19 overs with both Rahul and Rohit intact at the crease. Earlier today, England lost a review while trying to get Rohit Sharma out on an lbw call. Rohit is batting at 13 off 55 and Rahul at 11 off 59 balls.