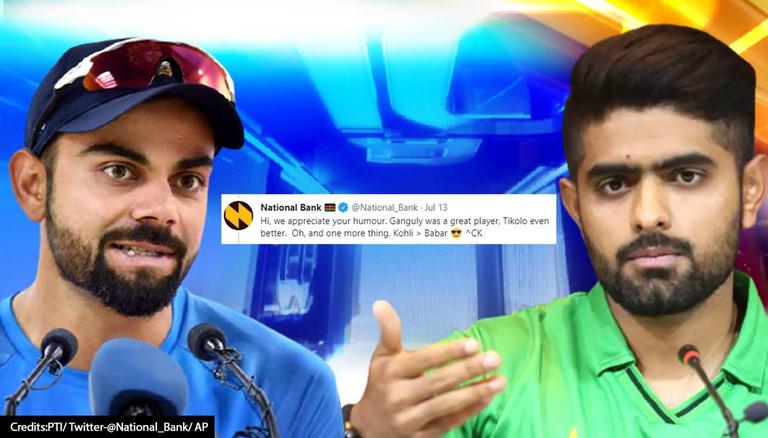 
The iconic cricketing rivalry between India and Pakistan is well-known around the world and it is not just limited to the cricketing field but also involves the fans indulging in social media banters as well.  Adding salt to the wound after Babar Azam & co were whitewashed by England, a Pakistan fan attempted to troll the National Bank of Kenya over its security and tried to take a dig at India by involving former skipper and current BCCI president Sourav Ganguly but failed miserably after he was given a befitting reply by the bank's official handle.

A Pakistani fan took to his Twitter handle and tried to mock Sourav Ganguly over the security protocols in place at the National Bank of Kenya. The fan, in his tweet, narrated the numerous security checks carried out by the National Bank of Kenya and claimed that he had been told that 'Sourav Ganguly had committed fraud against their fragile bowling.'

However, the Pakistani tried to outwit Kenya's Bank and said that Virat Kohli is called a chocker in his book. Following that the National Bank of Kenya came out with an ultimate reply and said 'Precisely why your book is unheard of'. 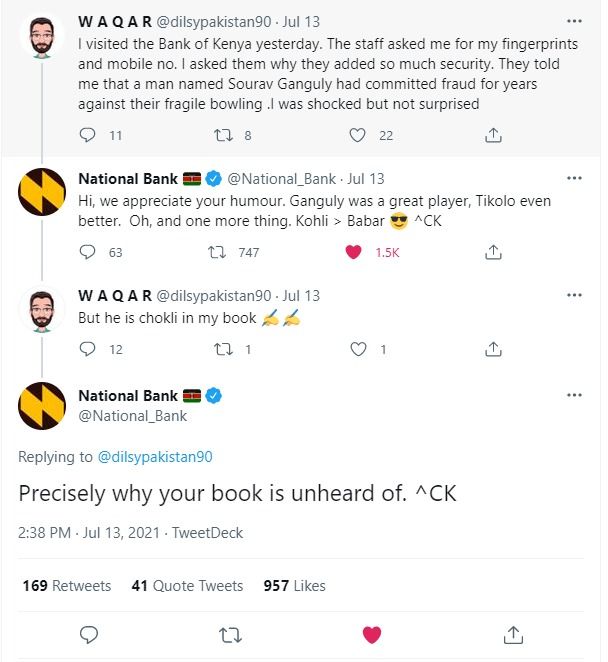 Fans hailed the banter between the  Pakistan fan and the National Bank of Kenya.

Admin of @National_Bank deserves a raise. What great banter!

Meanwhile, Pakistan on Tuesday was clean-sweeped by England in the three-match ODI series. Pakistani batters made a comeback with Babar Azam scoring his career-best ODI score of 158 runs to help his side post a big total. Contributions from Imam-ul-Haq and Mohammad Rizwan also helped the cause. However, this time around, the bowlers failed as they allowed England to chase down the target of 332 runs in 48 overs. Pakistan lost the match by 3 wickets.

England's James Vince and Lewis Gregory made sure their side reaches the target successfully to win the series 3-0. Vince scored a magnificent 102 off 95 balls, including 11 boundaries, while Gregory hit 77 off 69 balls, including 6 fours and 3 maximums. Opener Phil Salt, Zak Crawley, and skipper Ben Stokes also contributed to the team's total with each scoring some 30 odd runs. While Vince was adjudged the player of the match for his match-winning century, Saqib Mahmood was given the player of the series award for his amazing performance with the ball.