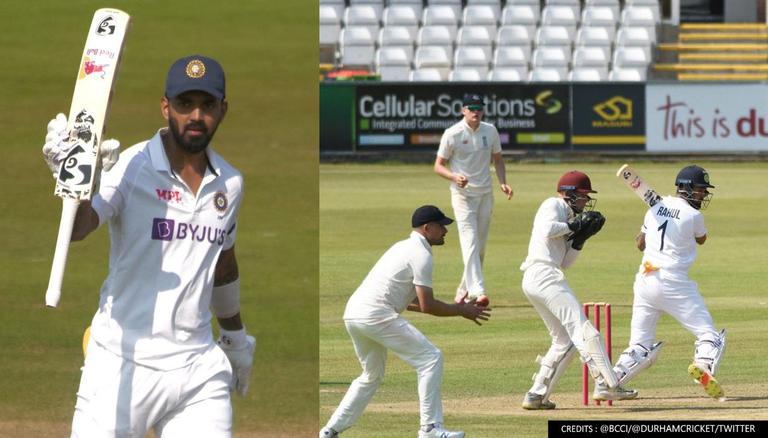 
As Team India's warm-up match against County Select XI is underway, KL Rahul played a brilliant knock of 101 and strongly stake his claim for a place in the playing XI for the upcoming five-matches Test series against England. Notably, KL Rahul is playing the warm-up match against County Select XI as a wicket-keeper batsman as Rishabh Pant and Wriddhiman Saha are out of the squad due to the COVID.

KL Rahul smashed 101 runs in 150 balls with the help of 11 boundaries and 1 six. As soon as the Karnataka cricketer got his century, he decided to go back to the pavilion and let other batters have enough practice before the India-England series begins. It is to be noted that KL Rahul registered his first 'first-class' hundred since the 149-run knock against England in 2018 in the warm-up game against Country XI.

A fine CENTURY for @klrahul11 off 149 deliveries in the three-day warm-up game 👏#TeamIndia pic.twitter.com/844mUnONVR

Century for KL Rahul, what an extraordinary innings this has been. He has returned to the red ball side with so much improvement, marvellous knock. pic.twitter.com/oLHTcVhVi7

KL Rahul retired Not Out on 101 in 150 deliveries. Arrived when India were struggling at 67/3 and from then on put up a masterclass and showed his class and temperament at the crease. Solid innings from KL. pic.twitter.com/Bdj4jmrYqY

I don't care if it's just a practice match. To me, him playing cricket matters. Very well made 100 ❤️ @klrahul11 pic.twitter.com/hH3AVWiIlx

Speedster Avesh Khan, who was playing for County Select XI, against India in the warm-up match sustained a thumb injury. Avesh Khan hurt his finger while bowling in the match against Indians. He was injured when he tried to stop a ball hit by Hanuma Vihari in the 35th over. Avesh had bowled 9.5 overs for 41 runs without picking up a wicket when he walked off.

On Avesh Khan's injury, BCCI stated, "Fast bowler Avesh Khan sustained a blow to his left thumb on Day 1 of the warm-up game. He has gone to get a scan. The BCCI Medical Team is monitoring him."

READ | Has KL Rahul made his relationship with Athiya Shetty official? check inside stories

Notably, Avesh Khan was sent to England as a net bowler.