Kuldeep Yadav Credits Dravid For Outstanding Performance Against SL, Says 'He Backed Me' 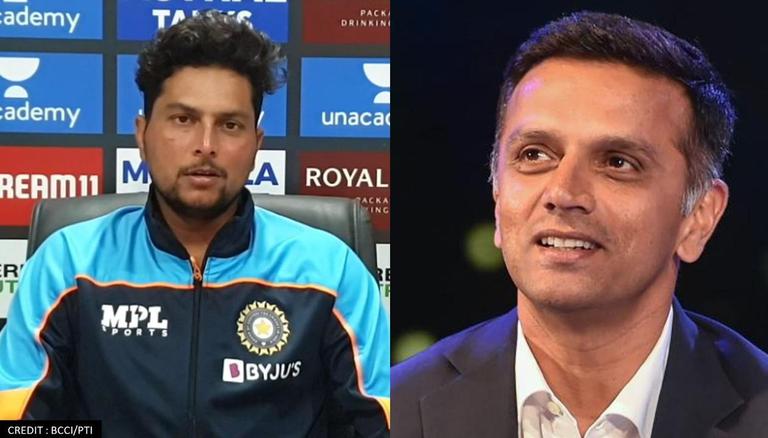 
Indian spinner Kuldeep Yadav has made a strongback for Team India during the first ODI against Sri Lanka on Sunday. Kuldeep picked up two wickets in the same over at a critical point in the game and finished his nine-over spell with one maiden and 48 runs. During the post-match press conference, Kuldeep credited head coach Rahul Dravid for his outstanding performance, saying that the former India international had given him a lot of support and motivation before the match. Kuldeep admitted to being nervous before the first ODI, but Dravid's constant support kept him focused. The left-arm wrist-spinner said he was "very happy" with his performance in the first game.

Kuldeep was thrashed in his last ODI against England, where he failed to pick up a single wicket in the two games he played for the team. When asked about his previous performances, Kuldeep stated that nobody's career is over after just one or two games, adding that the pitch in Pune was not designed for spinners and aided the batsmen greatly. Kuldeep went on to say that rather than slamming the bowler and declaring his career over, the batsmen should be given the credit too for batting well.

Kuldeep also expressed his happiness about playing with Yuzvendra Chahal again. The duo bowled together for the first time in ODIs since the 2019 World Cup semi-final match against New Zealand. The 26-year-old said that he syncs really well with Chahal, adding "We are both comfortable with each other and back each other". Kuldeep said it felt really good to bowl alongside Chahal after a long hiatus. Kuldeep further responded to former Sri Lanka skipper Arjuna Ranatunga's "second-string Indian side" remark, saying "Winning the match by 7 wickets with 80 balls remaining was a perfect reply to him".

India comprehensively beat Sri Lanka by 7 wickets as the Shikhar Dhawan-led side chased down 263 runs in just 36.4 overs. After restricting Sri Lanka for 262 runs in 50 overs, India batters comfortably chased down the target as all the batsmen in the top-order clicked. Prithvi Shaw provided a solid start with his quick 43 off 24 balls, followed by a half-century from Ishan Kishan. Skipper Shikhar Dhawan and Suryakumar Yadav finished the game for India as they remained unbeaten at 86 and 31 runs respectively. Shaw was adjudged the player of the match.