Tiwary had earlier hit 73 and 136 runs against Jharkhand in the quarter-final to help his team reach the semis of the ongoing Ranji Trophy. 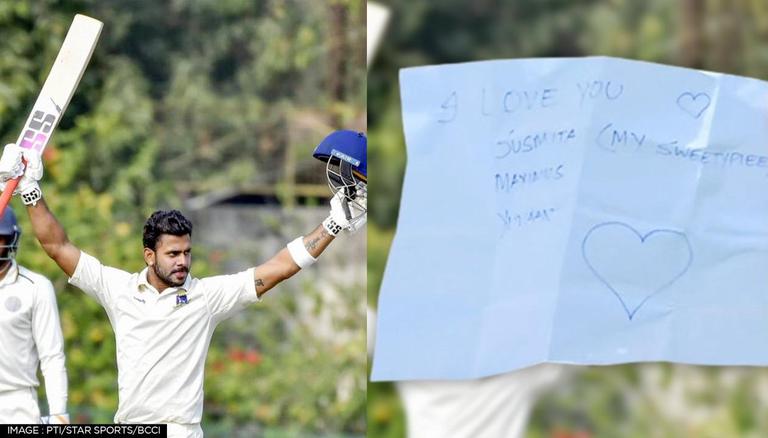 
Manoj Tiwary, the West Bengal Sports Minister, struck his 29th first-class century in the ongoing Ranji Trophy semi-final match between Madhya Pradesh and Bengal on Wednesday. Tiwary's century was his second in two matches, following his ton against Jharkhand in the quarter-finals. Tiwary took a letter out from his pocket after scoring the century against Madhya Pradesh and put it up in front of cameras to thank his family members for their unwavering support. The letter had the names of his wife and two children.

Manoj Tiwary celebration when he was completed his Hundred in the Ranji trophy semifinal - A special note for his family - Beautiful. pic.twitter.com/8SY22amUn5

The gesture by Tiwary is winning hearts on social media with several users lauding the Bengal minister for his affection towards his family. Tiwary had earlier hit 73 and 136 runs against Jharkhand in the quarter-final to help his team reach the semis of the ongoing Ranji Trophy. His knock against Madhya Pradesh, on the other hand,  gave Bengal hope as it came in a crunch situation when they had already lost a couple of early wickets.

As far as the match is concerned, Madhya Pradesh won the toss and elected to bat first against Bengal. Batting first, Madhya Pradesh scored 341 runs courtesy of an amazing 165-run knock from Himanshu Mantri. Akshat Raghuwanshi also contributed to the total as he scored 63 off 81 balls. Mukesh Kumar picked four wickets for Bengal in the first innings of the game, while Shahbaz Ahmed scalped three wickets. Akash Deep picked two wickets to his name and Pradipta Pramanik took one wicket.

In the second innings, Bengal was bowled out for 273 runs. After Bengal lost their top order cheaply, Manoj Tiwary along with Shahbaz Ahmed forged a crucial partnership as they scored a century each for their side. Tiwary scored 102 off 211 balls, while Shahbaz smashed 116 off 209 balls. Kumar Kartikeya, Saransh Jain, and Puneet Datey each picked three wickets, while Gaurav Yadav scalped one wicket.

Madhya Pradesh is currently playing the third innings of the match and has scored 43 runs for the loss of 1 wicket. Yash Dubey has been removed by Mukesh Kumar for 12 runs. At the time of writing this copy, Madhya Pradesh is leading by 111 runs.

READ | Ranji Trophy Semifinal: Mumbai post 393 against UP on back of Hardik Tamore and Yashasvi Jaiswal's centuries