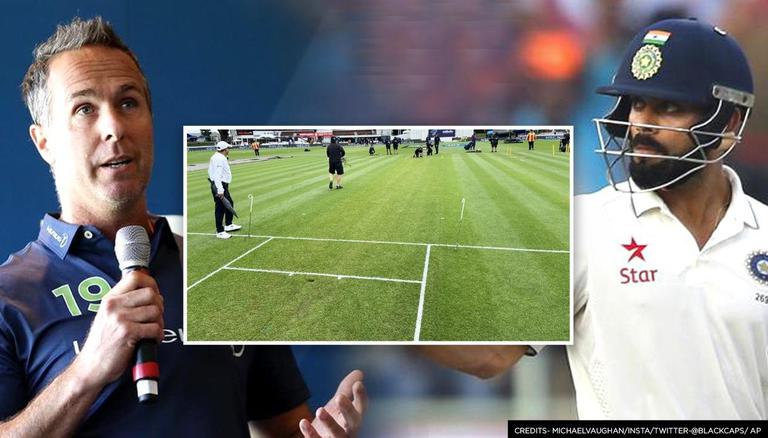 
As New Zealand has defeated England in the two-match Test series, Michael Vaughan has cautioned the England Cricket Board to avoid preparing green pitches for the upcoming Test series against India. Virat Kohli & Co. will lock horns with Root's XI in the five-match Test series starting from August 4. Now, England's former skipper Michael Vaughan cautioned the England Cricket Team and board to not prepare green tops as it can backfire on the hosts.

Former captain Michael Vaughan feels that preparing green tops for the five-match Test series against India following the disappointing show against New Zealand will do England more harm than good in the long run. Vaughan said England erred in not picking a specialist spinner in the playing eleven for the two Tests against New Zealand.

"They got lucky at Lord's because it rained. But to make the same mistake two weeks in a row that is a glaring tactical error. The wicket was not gripping and offering a lot of turn, but you need a variation when it is hot and dry at Edgbaston," Vaughan told The Telegraph as reported by PTI.

READ | Stuart Broad backs scrapping of 'Soft Signal' after Devon Conway ruled not out; it was out

"Even though England have struggled on these pitches, I believe they have to continue playing on good wickets, which is what Chris Silverwood said he wanted this summer.

"I do not believe playing on green tops against India even if it gets them a couple of cheap Test wins will do them any good whatsoever as they build to Australia away and beyond. They need to learn how to play, and win, on good Test pitches. The past few weeks have been perfect wickets for Test cricket and regraded the team who has played the better cricket. England just have not been good enough. It has been a stark reminder that this Test match team have a long way to go before they can really think about beating Australia in Australia," added Vaughan.

"When you factor in that they made six changes for this Test, you just have to say they are a better side than England now, even with England not having Ben Stokes, Jos Buttler or Jofra Archer this series. I have New Zealand as favourites to win the World Test Championship final against India. They have had two very competitive games and will take some confidence. India have played intra-squad warm-up matches but that just is not the same intensity," said Michael Vaughan.

Meanwhile, New Zealand on Sunday in a major morale booster defeated England and clinched the two-match Test series. Neil Wagner and Matt Henry took three wickets each as England was bundled out for 122 in the second innings, and in the end, New Zealand won the second Test on Day Four comfortably by eight wickets here at Edgbaston, Birmingham on Sunday. For New Zealand, Tom Latham and Ross Taylor remained unbeaten on 23 and 0 respectively as the side registered a comprehensive win over the hosts. In the second Test, New Zealand made six changes, but every player that came in gave a spirited performance.