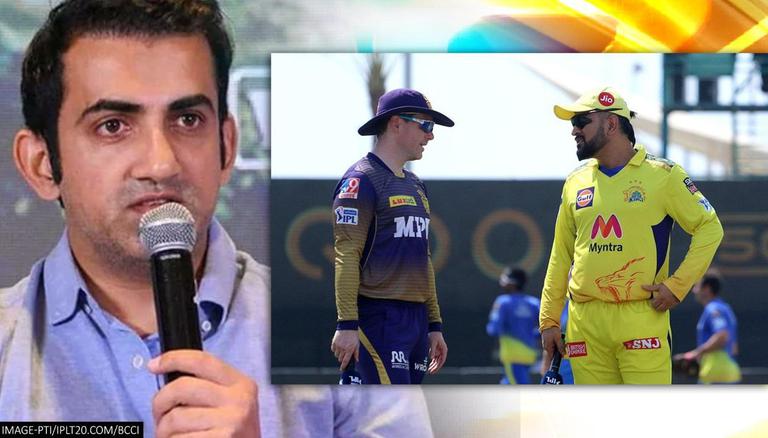 
In an epic showdown, the Chennai Super Kings (CSK) will come up against the Kolkata Knight Riders (KKR) in the final match of the Indian Premier League 2021 (IPL). The match is scheduled to start at 7.30 pm IST at the Dubai International Stadium on Friday, October 15. CSK are in search of their fourth IPL trophy, while KKR is on the hunt for their third. It will be the ninth time that MS Dhoni has led CSK to an IPL final, out of which they have won three so far. For the Eoin Morgan-led KKR, it is their third final, prior to this they have won both the finals they have played.

According to former KKR opener, Gautam Gambhir, CSK skipper Dhoni is in better form for the IPL 2021 season than the Kolkata skipper Morgan. He pointed out that even though Dhoni has not played international cricket for a while and Morgan has been leading England in international matches, the English skipper looks worse of than the former Indian skipper.

"He (Morgan) started the tournament batting at number five because he had no form. He keeps pushing himself down and the moment you start pushing yourself down you start putting extra pressure on yourself," said Gautam Gambhir in a conversation on ESPNcricinfo.

"You can't compare forms of both the captains because MS hasn't played international cricket for quite a while and Morgan is playing and is leading England in international cricket as well. From the form point of view, Morgan looks in the worst form as compared to what Dhoni is," he added, as was quoted by the cricket website.

Ahead of the IPL Final MS Dhoni and Eoin Morgan's form with the bat for this edition of the IPL has been largely similar. Dhoni has scored 114 runs in 15 matches for CSK so far, whereas Morgan has scored 129 runs in 16 matches. The CSK skipper boasts a better average of 16.28 and Morgan with an average of 11.72 in the IPL 2021. The highlight while batting for Morgan was managing to score 47* in one match this season, Dhoni's highlight this season was his 18* off six balls that helped CSK defeat the Delhi Capitals in the first playoff match. However, both the captains have been exquisite leaders for their teams, Dhoni has led the CSK team to their ninth IPL final through a wonderful group stage. Morgan, on the other hand, took over as captain halfway through when they had won only two out of seven matches, and led the KKR team to the playoffs and then the final.

WE RECOMMEND
IPL 2021 Playoffs: Who plays whom? Full fixtures, schedule, key players & timings
IPL 2021 Final, CSK vs KKR: Here's Kolkata Knight Riders' road to final
Sanjay Manjrekar reckons IPL 2021 'most frustrating' as compared to other seasons
IPL 2021: Have IPL points table-toppers ever failed to win any Qualifier match?
IPL 2021: Dinesh Karthik admits to breach of Code of Conduct; read why was he reprimanded
Listen to the latest songs, only on JioSaavn.com