With KKR vs CSK match is underway, skipper MS Dhoni's 'catch of the match' went in vain in the 4th over of the first innings bowled by Sam Curran 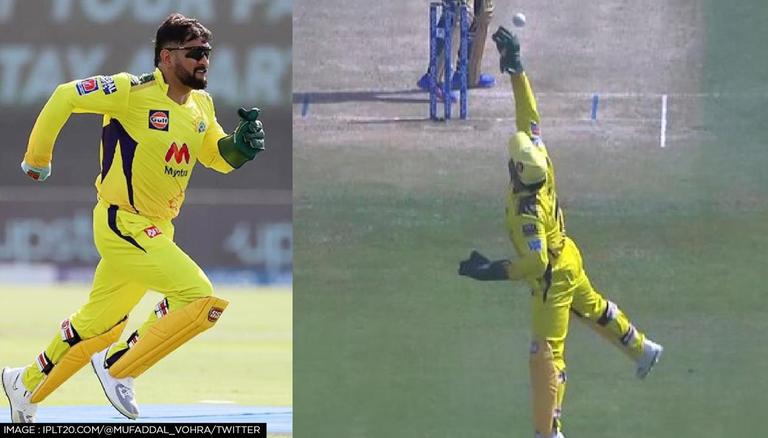 
As KKR vs CSK is underway at the Sheikh Zayed Stadium in Abu Dhabi, MS Dhoni & co would be aiming to go top of the table again. However, Eoin Morgan's KKR have kickstarted their journey of the IPL 2021 Phase 2 on a high note with two back-to-back victories. However, as KKR vs CSK is underway, skipper MS Dhoni's 'catch of the match' went in vain in the 4th over of the first innings.

Kolkata Knight Riders skipper Eoin Morgan won the toss and elected to bat first in the scorching heat of Abu Dhabi. However, KKR did not start well as in-form Shubman Gill and young sensation Venkatesh Iyer were dismissed early. While Shubman Gill was run out by Ambati Rayudu, Iyer was dismissed by Shardul Thakur. Soon, Sam Curran was introduced into the attack when another in-form batsman, Rahul Tripathi, came out to bat. Sam Curran tried to test Tripathi with the short ball.

Bowling the fourth over of the match, Sam Curran tried a short-ball in the penultimate delivery of the over. Tripathi tried to play the upper-cut but only edged the ball. Wicket-keeper and skipper MS Dhoni made a stunning jump and to take an outstanding catch.

However, Sam Curran had already bowled a bouncer in his over earlier. The short ball, which was edged by Rahul Tripathi, was found to be above head level. Therefore, the umpire ruled the delivery as 'no ball' and Dhoni's catch went in vain.

ICYMI: A no-ball to rule out an MS special ☹️

Excellent catch of MS Dhoni in vain as it was the second bouncer and declared a No Ball. pic.twitter.com/39XstwCu0R

No matters it is out or not out,but what a grab by ms dhoni behind the wicket hence proving again age is only the number #CSKvsKKR #CSK #iplwin pic.twitter.com/OaxtnIpsMO

Age is Just a Number for @MSDhoni 🔥 pic.twitter.com/XThbApzXdV

Meanwhile, the Kolkata Knight Riders (KKR) are eyeing to stay alive and improve their chances of qualifying for the IPL 2021 playoffs. On the other hand, CSK are eyeing to climb back to the top of the IPL 2021 points table and dethrone Delhi Capitals.

Delhi Capitals currently have 16 points, while CSK are second with 14 points. If CSK manage to defeat KKR, MS Dhoni's side will once again reach the top due to a better net run rate.