Deepak Chahar recently posted his new look on Instagram after which he received several reactions including the one from MS Dhoni’s wife Sakshi Dhoni. Indian fast bowler Deepak Chahar was last seen with the Chennai Super Kings team in the IPL 2021 season that was previously postponed on May 4. After getting a break from the IPL 2021 season, Deepak Chahar has experimented with a new look altogether which has left the fans in shock. Chahar recently posted his new look on Instagram after which he received several reactions including the one from MS Dhoni’s wife Sakshi Dhoni.

Deepak Chahar posted 2 pictures on his Instagram account with his new look while asking the fans to choose from the 2 pictures. He wore a plain black t-shirt while revealing his new look which looked rustic and rugged. Sakshi Dhoni took the opportunity to respond to Chahar’s new look by writing in the comments section that the CSK bowler looked fierce.

Fans react to a completely new look of Deepak Chahar

The picture was taken by his sister Malti Chahar who addressed him as a “Game of Thrones” character named Khal Drogo. The post also received a reaction from Indian cricketers like Ashok Menaria and Karn Sharma. Deepak Chahar also addressed his new look with two hashtags while using the words “Ghajini” and “gangster". The intense new look of Deepak Chahar definitely caught the eyes of all the fans who commented in large numbers expressing how they felt about it. 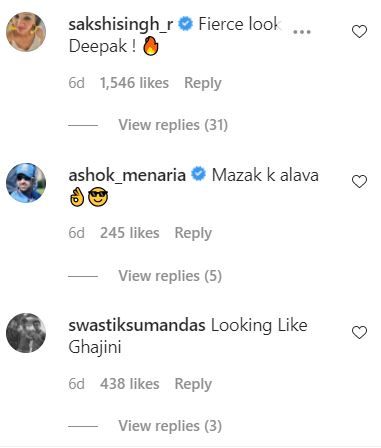 Deepak Chahar IPL 2021 season as per the IPL news

Deepak Chahar had a good IPL 2021 season with the Chennai Super Kings team before the league was postponed on May 4. Chahar played 7 matches in the first part of the IPL 2021 season while taking 8 wickets with an economy of 8.04. He has played a total of 55 matches in the IPL while taking 53 wickets and maintaining an economy of 7.67. The CSK bowler is also included in the India squad for the upcoming Sri Lanka tour that will feature 3 ODI and 3 T20I matches.

A completely separate squad of Indian players was named for the India tour of Sri Lanka since the main squad will be in England for the WTC Final and the Test series against England. The ODI matches in the Sri Lanka tour are scheduled to take place on 13, 16 and 18 July. The T20I matches will take place on 21, 23 and 25 July. All the 6 matches in the series will take place at the R. Premadasa International Cricket Stadium in Colombo. As per the IPL news, the remaining portion of the Indian Premier League is set to resume in the month of September in the UAE.

WE RECOMMEND
MS Dhoni races with Shetland pony during 'playtime' in Ranchi; wife Sakshi shares video
IPL 2021: BCCI can cut Foreign players salary, pay on PRO-RATA if they don't join in UAE
Ruturaj Gaikwad on MS Dhoni's influence: 'Whatever he speaks, it is always eye-catching'
CSK legend Imran Tahir reveals why it's easier to play under the captaincy of MS Dhoni
MS Dhoni and Rashid Khan to play together in IPL? That's what the spinner hopes for