MSK Prasad took some controversial decisions during his tenure as Team India's chief selector such as the selection of Vijay Shankar over Ambati Rayudu for WC. 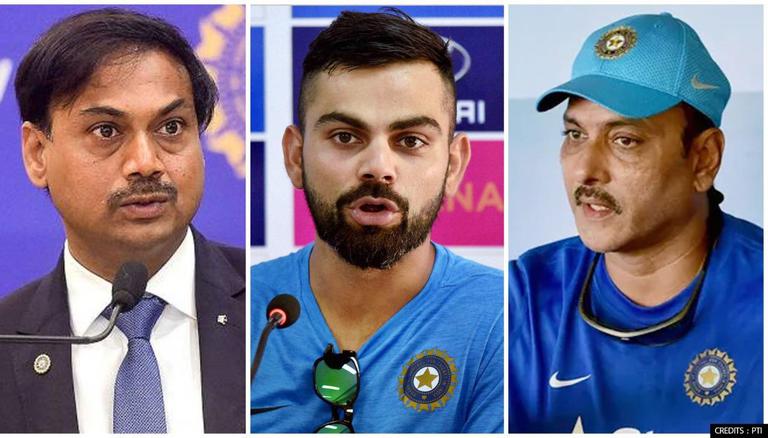 
Former Team India selector MSK Prasad recently revealed that he used to have "heated arguments" with Indian skipper Virat Kohli and head coach Ravi Shastri. Prasad, while speaking to cricket.com, said that 'sometimes we would not want to see each others' faces after the meetings', but eventually, everything would fall in place as we recognised 'merits in the points being made'. Prasad did not divulge the details but acknowledged that arguments happened during meetings with Kohli and Shastri.

MSK Prasad took some controversial decisions during his tenure as Team India's chief selector. His decision to select Vijay Shankar over an experienced Ambati Rayudu for the 2019 ICC World Cup squad garnered much traction as it led to serious questions being raised about the selection process of the Indian team. Rayudu was a regular choice for Team India for months leading to the 2019 World Cup, however, he was excluded from the squad at the last moment. Rayudu announced retirement from international cricket after the decision was made public and also took a jibe at the selectors for citing Vijay Shankar's ability to play "three-dimensional" cricket as the reason behind his exclusion.

However, Prasad's most notable contribution to Indian cricket would be the huge bench strength that he has left behind after the four-year-long stint as chief selector. Players such as Rishabh Pant, Hardik Pandya, Shubman Gill, and Prithvi Shaw, have all made their international debuts for India under Prasad.

As far as Prasad's recent interview is concerned, also talked about the upcoming World Test Championship (WTC) final. Prasad said he wants Kohli to make up for the loss in the 2017 Champions Trophy final and the 2019 World Cup semifinal, saying "Everything will be forgotten if he wins the WTC final".

While talking about Rohit Sharma, who has better Test numbers at home, Prasad said the upcoming tour of England is a great opportunity for him to show where he belongs. Prasad said that Rohit was roped in as an opener in Test after his heroics in the 2019 World Cup, where he hit five centuries in the tournament. Prasad said the selection committee was adamant about trying Rohit in red-ball cricket and because the middle-order was packed, he was asked to open. Prasad said the last Australian series was a mixed tour for Rohit and he has an opportunity to make up for all the lost Test matches in the initial years of his career.