Mumbai Vs Madhya Pradesh Live Stream: How To Watch Ranji Trophy Final On TV And Online?

The Ranji Trophy 2021/22 is set to feature a blockbuster clash as 41-time champions Mumbai will take on Madhya Pradesh in the finals, beginning Wednesday. 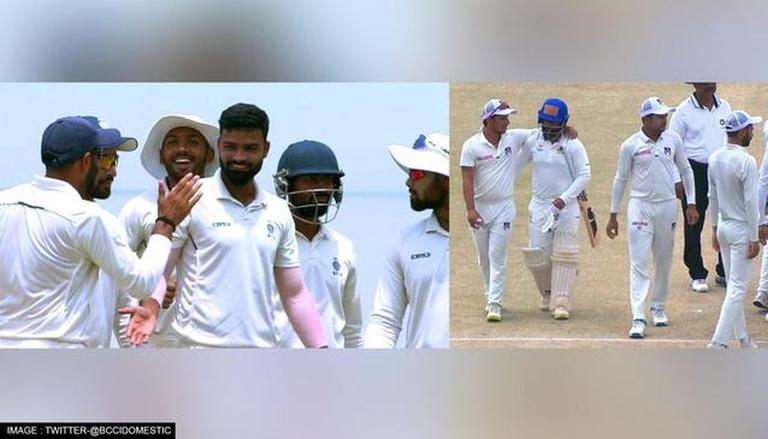 
The Ranji Trophy 2021/22 is set to feature a blockbuster clash as 41-time champions Mumbai will take on Madhya Pradesh in the final, beginning Wednesday. The clash will take place at the iconic M Chinnaswamy Stadium in Bengaluru from June 22 to 26. Ahead of what promises to be an entertaining and nail-biting clash between two of the top teams this season, here is a look at how to watch the Ranji Trophy final live in India and the Mumbai vs Madhya Pradesh live stream details.

Fans in India wondering how to watch the Ranji Trophy final live in India can tune in to the Star Sports Network, which has the official telecasting rights in the country. The 2021/22 final will be telecast live on TV on Star Sports 2 SD/HD channels. As for the Mumbai vs Madhya Pradesh live stream, fans can tune in to the Disney+ Hotstar app. Meanwhile, fans can also track the live updates and scores of the all-important clash on the official social media handles of BCCI Domestic handle.

Mumbai advanced to the @Paytm #RanjiTrophy #Final on the basis of the first-innings lead after their #SF2 clash against Uttar Pradesh ended in a draw. 👏 👏 #MUMvUP

Domestic giants Mumbai completed the formality of qualifying for the Ranji Trophy final by virtue of their first-innings lead on the final day of their last-four match against Uttar Pradesh. The team thoroughly dominated from the first ball of the game, which ended in a draw, at the Just Cricket Academy ground in Bengaluru.

Mumbai had posted 393 in their first innings and then bundled out Uttar Pradesh for a meagre 180 to gain a massive first-innings lead. When the play ended on the fourth day on Friday, Mumbai had piled up a mammoth 449 for 4 in their second inning, courtesy of hundreds by Yashasvi Jaiswal and Armaan Jaffer.

At stumps of Day 4, Mumbai took an overall lead of 662 runs, making it amply clear that there was only one result possible from the match. On Saturday, play began after lunch due to wet out-field and overnight batters Sarfaraz Khan and Shams Mulani continued to torment the UP bowlers. Both Sarfaraz (59 not out) and Mulani (51 not out) completed their half-centuries, after which both the captains decided to shake hands.

A fine all-round bowling display from Madhya Pradesh helped them complete a 174-run win over Bengal on Day 5 of the @Paytm #RanjiTrophy #SF1 & secure a place in the #Final. 👏 👏 #BENvMP

On the other hand, Madhya Pradesh reached the finals after an outstanding journey so far in the Ranji Trophy. The Aditya Shrivastava-led side topped the group stage without losing a match before defeating Punjab in the quarters. They then went on to defeat former champions Bengal in the semis by a staggering margin of 174 runs. Rajat Patidar has been the pick amongst their players as he is the side's top scorer with 506 runs so far.

READ | MP vs MUM, Ranji Trophy Final: Madhya Pradesh or Mumbai - who will triumph in battle for supremacy?