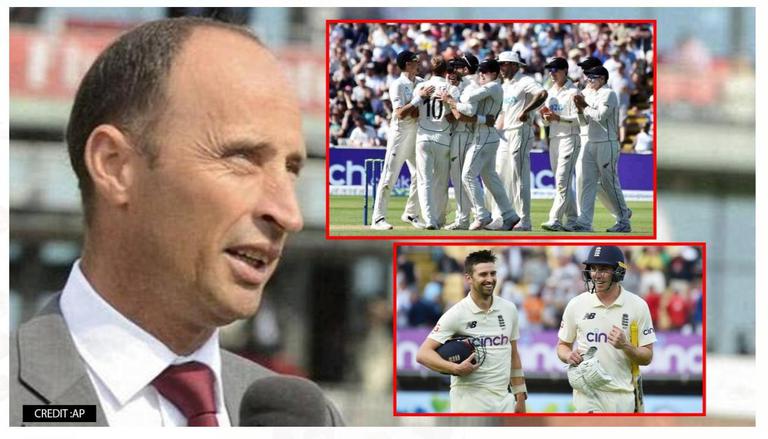 
Former skipper Nasser Hussain has vented out his frustration on the England cricket team for their lackluster batting approach in the series-deciding second Test match that is currently underway at Edgbaston in Birmingham.

Even though England still have a lead of 37 runs, they only have one wicket in hand after suffering a dramatic second innings batting collapse on Day 3.

"Quite obviously an excellent day for New Zealand. They looked such a professional outfit the way they bowled the length they bowled, the catching, the keeper, the captaincy, and the batting. What stands out the most for me is the difference in batting," said Nasser Hussain as a part of his analysis on Sky Sports after Stumps on Day 3.

"But it is just chalk & cheese. Technically gifted sound batsmen playing the way the game is supposed to be played. New Zealand let the ball come to you, leave it well, play it with a straight bat and England are not just this England batting line-up. We have been doing county cricket as well. There seems to be a reinvention of the wheel out there with batting. There seem to be techniques out there that everyone else that has played the game before, they are all wrong and we are right," the cricketer-turned-commentator/analyst added.

"Whether it be in Sri Lanka where Joe Root carried them, whether it be in India, they don't have the excuses of the pitch is turning here, whether it be the swinging ball or the seaming ball or the spinning ball, they are right and everyone else is wrong. And I don't see a young batting line-up. I see (Dom) Sibley, (Joe) Root, Olly (Stone), (Rory) Burns, and Pope (Ollie)- that's their top five. They have no one missing in that top five. Then come (Ben) Stokes, and, (Jos) Buttler. So you are right and everyone else is wrong. They have got all the coaches, all the backroom staff. Please just get back to playing normally, get a first innings score because the other thing is these are the lads that are getting runs in county cricket. If you have picked your five who are getting runs, these are them so please have a look at your game and more importantly, have a look at the opposition. They are batting how you are supposed to," Nasser Hussain further added.

💬 "They are acting like 'everyone else that has played in the history of the game are wrong, and we are right'." 💬@NasserCricket not happy after watching England suffer another batting collapse on day three of the second Test against New Zealand.#ENGvNZ 🏴󠁧󠁢󠁥󠁮󠁧󠁿🇳🇿

England on the verge of a humiliating defeat in Edgbaston Test

Coming back to the Edgbaston Test, New Zealand in their first innings were bowled out for 322 in response to England's first innings score of 303.  The hosts in reply ran out of fire & brimstone right from the beginning and kept on losing wickets at regular intervals and it seemed that the formalities would be completed on Day 3 itself when the scorecard read 76/7. However, lower-order contributions from Ollie Stone (15*), and, Mark Wood (29) helped Root & Co. get past the 100-run mark before the latter was dismissed and number 10 batsman Stuart Broad was castled in the very next over by Trent Boult.

England now have a huge mountain to climb on Day 4 with just Ollie Stone being the last recognised batsman. He will be joined by the number 11 batsman James Anderson. It has been a sorry-looking scorecard for England and they resume the fourth day's play at 122/9.