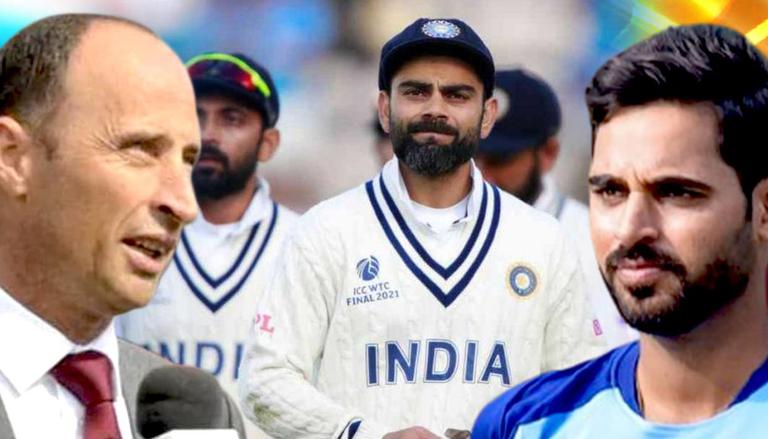 
Following Team India's defeat in the ICC World Test Championship (WTC) Final, England's former skipper Nasser Hussain has pointed out what Kohli & Co. is missing on the tour. Prior to the WTC Final, BCCI had announced a 20-man jumbo squad of Team India for the long Test series, however, experienced players like Hardik Pandya and Bhuvneshwar Kumar were not selected. During the WTC Final, many cricket experts outlined that Team India's bowlers were not able to swing the ball as much as the New Zealand bowlers.

Nasser Hussain speaking to the broadcasters during Day 3 of the WTC final at Southampton’s Ageas Bowl had highlighted that Team India is missing a 'genuine swing bowler' in their squad and suggested including Bhuvneshwar Kumar in the Test squad.

"Bhuvneshwar should be called up for the England series. Though he has injury concerns, even if he can play two or three Tests for India, the team will greatly benefit. The conditions will suit him and we all saw how the team is missing a genuine swing bowler," said Nasser Hussain.

However, the inclusion of Bhuvneshwar Kumar for the England series seems difficult as he has already been named as Vice-Captain for Team India's limited-over squad which will be going to Sri Lanka for the ODI and T20 series. Bhuvneshwar was out of action for several months after suffering an injury during IPL 2020 last year in October. However, the right-arm pacer made a great comeback against England. In the ODI series, he scalped 6 wickets in three matches. However, the 31-year-old right-arm pacer has not played a First-Class match in over three years with his last Test dating back to January of 2018 against South Africa.

With the full-strength Indian squad in the United Kingdom for a three-and-a-half-month long tour, the BCCI has sent a team of white-ball specialists for an away limited-overs series against Sri Lanka starting July 13 where the Men In Blue are scheduled to play three ODIs and as manyT20Is. India will be led by opener Shikhar Dhawan while pacer Bhuvaneshwar Kumar has been named his deputy for that particular series.