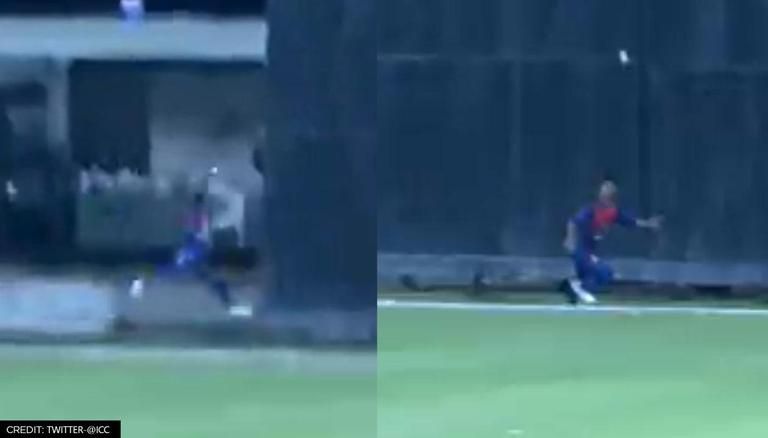 
Nepal cricketer Rohit Paudel on Tuesday pulled out a spectacular one-handed catch at the boundary line in the Men’s Cricket World Cup 2023 League 2 match against Oman. Rohit Paundel's spectacular catch came during the second ODI match of the six-match tri-series that also features the United States. Rohit Paudel running catch dismissed Oman's Jatinder Singh who gave a fiery start to his side. In fact, Jatinder Singh made a commendable 100 from just 60 balls.

Chasing a total of 196, Oman defeated Nepal by 5 wickets and won the match in just 31 overs courtesy of the brilliant century by Jatinder Singh. However, ICC praised Nepal cricketer Rohit Paudel and shared his spectacular catch on its Twitter handle.

Watch the Men’s CWC League 2 match live on https://t.co/CPDKNxoJ9v and @FanCode (in the sub-continent) 📺 pic.twitter.com/m6ZxYIPiya

This is fantastic , classic, incredible, unbelievable, extraordinary catch! Not ridiculous ! This term used by icc for this catch is condemnable ! This is not the right choice of word!

What is Cricket World Cup 2023 qualifier?

As per the official release, the ICC Men’s Cricket World Cup League 2 is a two-and-half-year competition involving seven teams that are two steps away from the ICC Men’s Cricket World Cup 2023. The participating teams are Namibia, Nepal, Oman, Papua New Guinea, Scotland, the United Arab Emirates, and the United States of America. They will play 36 ODIs each on the Road to India 2023.

At the conclusion of the 21 tri-series, totalling 126 matches, the top three teams on the standings will qualify for the ICC Men's Cricket World Cup Qualifier 2022. The bottom four teams will drop into the Men's Cricket World Cup Qualifier Play-off 2022 – a repechage event to the Global Qualifier – and will be joined by the winner of Challenge League A and B. The top two teams from the Play-Off will keep their hopes alive of participating in India 2023.

READ | Glenn Maxwell backs Australia to lift T20 World Cup: 'Hard for anyone to stop us'