The fans mocked the Pakistan team after their ODI series loss to England on Saturday. England beat Pak by 52 runs at Lord's to clinch the three-match series 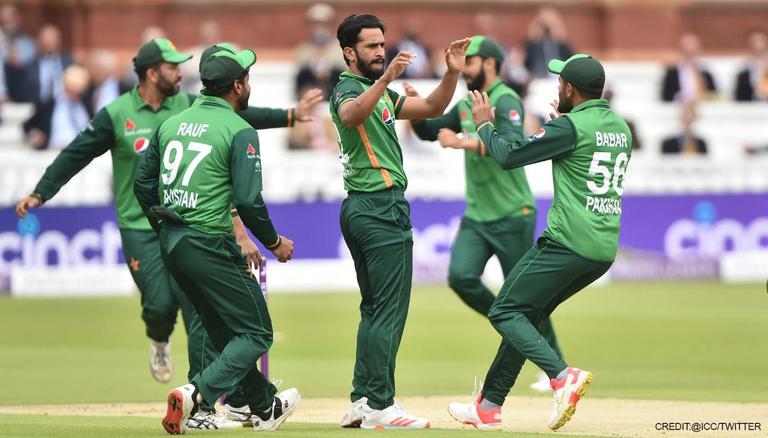 
Hasan Ali's heroics with both the ball and bat went in vain as Pakistan suffered a humiliating 52-run defeat to England in the second ODI at the 'Mecca of Cricket' Lord's on Saturday and by the virtue of this loss, the reigning 50-overs world champions have taken an unassailable lead in the three-match series.

Meanwhile, the netizens seized an opportunity to mock the 1992 World Cup winners as they urged the Men In Green to play the associate nations from now on. Here are some of the reactions:

Don't worry Pakistan will Come back against Zimbabwe 😜

Pakistan will come back stronger in next series with Zimbabwe 😀Isn't it ?? #ENGvsPAK

Pakistani are waiting for Pakistan vs Kenya & PAKISTAN VS ZIMBABWE SERIES 😂😂

Coming back to the contest, England ended up on the winning side despite everything working in Pakistan's favor. The game displayed England's current depth in the white-ball format as a newly-assembled team, of which five players were debutants in the last match, convincingly defeated a world-class Pakistan side. England had to gather a new lot of players after its main ODI squad led by Eoin Morgan returned seven COVID-19 positive results post the Sri Lanka series.

Pakistan won the toss and elected to bowl first. Pacer Hasan Ali provided Pakistan with an early breakthrough as he dismissed Dawid Malan for a duck. Shaheen Shah Afridi joined the party and bowled out Zak Crawley in the fifth over. Peter Salt and James Vince were looking good in the middle as they forged an important partnership between overs 11-20. However, the duo was dismissed by Saud Shakeel and Shadab Khan for 60 and 56 runs respectively.

England skipper Ben Stokes scored a crucial 22 runs off 26 balls before being bowled out by Hasan Ali. The Pakistani pacer went on to pick three more wickets to take a five-wicket haul at the iconic Lord's stadium. England was reeling at 161/7 and was nearing a Pakistan-like collapse when all-rounder Lewis Gregory took charge and helped the team cross the 200-run mark with an important partnership with lower-order batsman Brydon Carse. Gregory scored 40 off 47 balls, while Carse hit 31 off 41 balls.

In the end, England posted a total of 247 runs in 45.2 overs. Lewis Gregory proved to be crucial with the ball as well as he dismissed Pakistan opener Imam-ul-Haq for just one run. Saqib Mahmood came in and dismissed Babar Azam yet again after the Pakistan skipper scored a quick 19 off 15 balls. Saud Shakeel was the only Pakistani batsman who managed to cross the 50-run mark in the innings as he hit 56 off 77 balls when the rest of the squad was falling apart like a pack of cards. Shakeel received some help from Sohaib Maqsood and Shadab Khan. After Shakeel was dismissed in the 40th over, the game was finished for Pakistan as the former world champions still needed 50 odd runs to win the match with just one wicket remaining.

READ | Salman Butt slams Pakistan over humiliating loss to England, says 'Fan base has gone down'

The game ended after number 11 batsman Haris Rauf was caught behind in the 41st over by John Simpson off Lewis Gregory.