As far as the match is concerned, New Zealand finished the day in a dominating position as the side scored 349 runs for the loss of just one wicket. 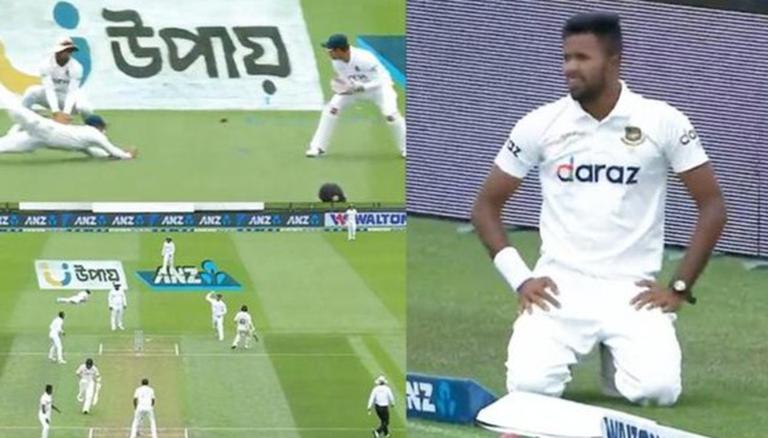 
The tourists were involved in a bizarre incident on Day 1 of the ongoing second Test match between New Zealand and Bangladesh at the Hagley Oval in Christchurch, where they conceded 7 runs off a single delivery. When the event occurred, Ebadot Hossain was bowling the final delivery of the 26th over at the time. Will Young, the Kiwi batter, was on strike when Hossain bowled the ultimate delivery of his over, which clipped his bat and went straight to the first slip fielder.

The fielder at second slip, however, spotted the ball coming and dived to his left, hoping to pull off a blinder, but instead dropped the ball, which went towards the boundary rope. After receiving the ball from the fielder at the boundary line, Bangladesh wicketkeeper Nurul Hasan threw it to Hossain. Because the bowler was unable to grasp the ball, he was forced to run behind it till it finally reached the rope at the other end, resulting in four runs. By the time the ball returned to the middle, New Zealand's Tom Latham and Will Young had already taken three singles.

Meanwhile, across the Tasman Sea... ⛴️

Chaos in the field for Bangladesh as Will Young scores a seven (yes, you read that correctly!) 😅#NZvBAN | BT Sport 3 HD pic.twitter.com/fvrD1xmNDd

As far as the match is concerned, New Zealand finished the day in a dominating position as the side scored 349 runs for the loss of just one wicket. Batting first, openers Tom Latham and Will Young forged a 148-run partnership before it was broken by Shoriful Islam in the 38th over. Young was dismissed for 54 off 114 balls after he gave a catch to the fielder at point. Latham, on the other hand, went on to score a century as he finished at 186 off 278 balls at stumps on Day 1.

Devon Conway is also nearing a century as he will need just one run to reach the three-figure mark once the play resumes on Day 2. Conway finished Day 1 at a score of 99 off 148 balls. Shoriful Islam remained the sole wicket-taker for Bangladesh at the Hagley Stadium on Sunday.

Meanwhile, Bangladesh is currently leading the two-match Test series by 1-0 courtesy of their historic win at Mount Maunganui earlier this week. Bangladesh registered its first-ever Test match victory against New Zealand by 8 wickets.

WE RECOMMEND
NZ Vs BAN: Pacer Ebadot Hossain stuns fans off pitch with the 'best post-match interview'
Bangladesh bowls out New Zealand for 328 on day 2, 1st test
India announces squad for Women's World Cup 2022 & New Zealand ODIs, T20I
Bangladesh out for 458, leads New Zealand by 130 in 1st test
'Friendship back on track' as New Zealand set to tour Pakistan twice in 2022-23
Listen to the latest songs, only on JioSaavn.com