After testing positive for Covid-19, the inclusion of Prasidh Krishna in the England tour was under question by the fans for which the BCCI has given an update. 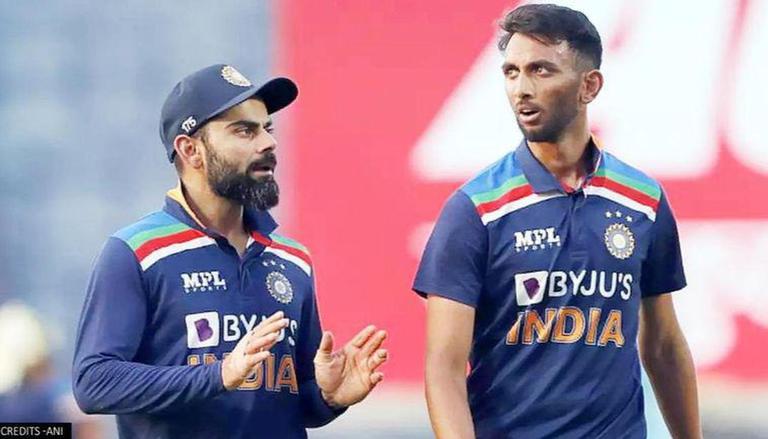 India is all set to go against New Zealand in the World Test Championship Final from June 18 and the India squad for the WTC Final has already been announced by the BCCI. The Kolkata Knight Riders pacer, Prasidh Krishna was named as a standby player for the India tour of England. However, after reporting positive for Covid-19, the inclusion of Krishna in the tour of England was under question by the fans. In a recent development, the BCCI has provided an important update regarding Prasidh Krishna.

Prasidh Krishna was one of the KKR players that tested positive during the Indian Premier League 2021 season. The BCCI had announced the India squad for the inaugural WTC Final including the 5-match Test series against England on May 7. The list included Prasidh Krishna as a standby player for the tour. However, Krishna tested positive for Covid-19 on May 8 after which his recovery became an important factor to keep him included in the tour of England.

A BCCI source has now confirmed with PTI that the KKR pacer has recovered from Covid-19. After testing positive, Krishna spent his time in home isolation in Bengaluru which also answers the previous query of fans asking, “Prasidh Krishna from which state?” the answer to which is Bengaluru. The Indian squad will be assembling in Mumbai on Wednesday after which they will undergo a strict quarantine before flying out to England.

The Prasidh Krishna bowling speed of 145.96 (km/h) during the IPL 2021 season was one of the reasons for his selection in the squad. Earlier, the Sunrisers Hyderabad player, Wriddhiman Saha had also tested positive for Covid-19 after which the IPL 2021 was indefinitely postponed. Wriddhiman Saha was also included in the Indian squad for the England tour and his inclusion in the team depended on his recovery. According to reports, Saha has recovered from the virus after returning 2 consecutive negative reports during his quarantine period and will be joining the Indian team for the England tour.

The inaugural World Test Championship Final is all set to place as per schedule at the Ageas Bowl in Southampton. The WTC Final 2021 will see India go against New Zealand from June 18-22 where both the teams will battle for the first World Test Championship battle. This Test squad will then represent India in the Test series against England, starting from August 4, after concluding the WTC Final 2021.

READ | Pat Cummins reveals what he learned from Prasidh Krishna, Shivam Mavi during IPL 2021
First Published: 19th May, 2021 18:40 IST
SUBSCRIBE TO US