R Ashwin, in his latest Instagram post, revealed that he and R Madhavan will be talking on various topics including cricket, basketball and movie diaries.

Indian cricketer Ravichandran Ashwin will be having a live Instagram chat with Bollywood actor R Madhavan on Thursday, May 21 at 8:00 PM IST. The announcement of the same was done by the cricketer himself on his Instagram handle. Currently, R Ashwin is spending time at home with his family due to no cricket activities following the coronavirus pandemic. Had it not been for the pandemic, R Ashwin would have busy playing in the Indian Premier League (IPL) for his new franchise Delhi Capitals, who acquired the off-spinner from Kings XI Punjab (KXIP) during the IPL trade window.

R Ashwin, in his announcement regarding an Instagram live chat with R Madhavan, also revealed that both the stars will be talking on various topics including cricket, basketball and movie diaries. While the COVID-19 has severely affected the Bollywood industry, R Madhavan has interesting releases lined up for the year. The 3 Idiots actor will be seen in Silence with Anushka Shetty and Michael Madsen. He also has Chanda Mama Door Ke and Sanam Yeh Wada Raha in his kitty.

R Ashwin and R Madhavan, both are amongst the most famous Tamil-origin people in the country at the moment, making this chat exciting for cricket and film fans alike. 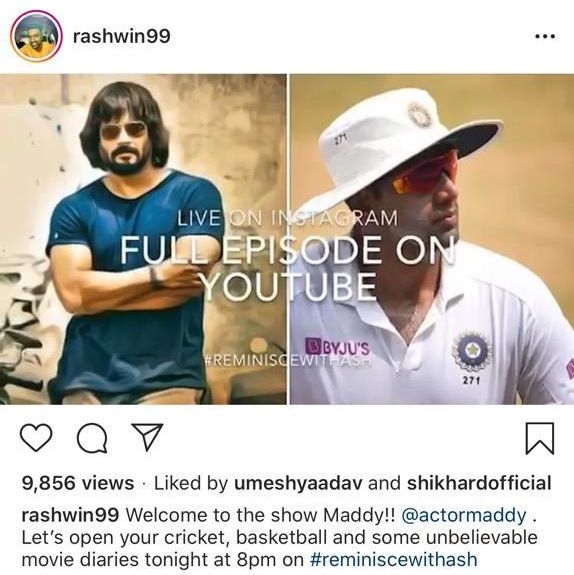 Also Read: Will Take Some Practice To Not Put Saliva On Ball: Ravichandran Ashwin

On Wednesday, R Ashwin recalled one of his match-winning bowling spells from the IPL 2011 against Royal Challengers Bangalore (RCB) and also discussed about the strategy to dismiss Chris Gayle. Ashwin, during an Instagram live session with Delhi Capitals (DC), said that the ball he bowled to dismiss Gayle was similar to the one he bowled to Jesse Ryder during the initial phase of the same season.

Talking about the dismissal, R Ashwin said that the three-ball duck was the finest three-ball set he has ever bowled in his career. In the 2011 IPL final, the off-spinner ended up with match-winning figures of 3-16 in his 4 overs, helping CSK win the title that year.

R Ashwin is an experienced campaigner having previously played for Chennai Super Kings (CSK), Kings XI Punjab (KXIP) and Rising Pune Supergiant in the IPL. R Ashwin has so far played 139 IPL matches and picked up 125 wickets. Ashwin captained the KXIP in IPL 2018 and 2019 season but couldn't help them reach the play-offs. Ahead of the 2020 auction, KXIP decided to trade R Ashwin to the Delhi Capitals.