While BCCI is yet to name the squad and the management staff, speculations around the interim replacement of head coach Ravi Shastri have already begun. 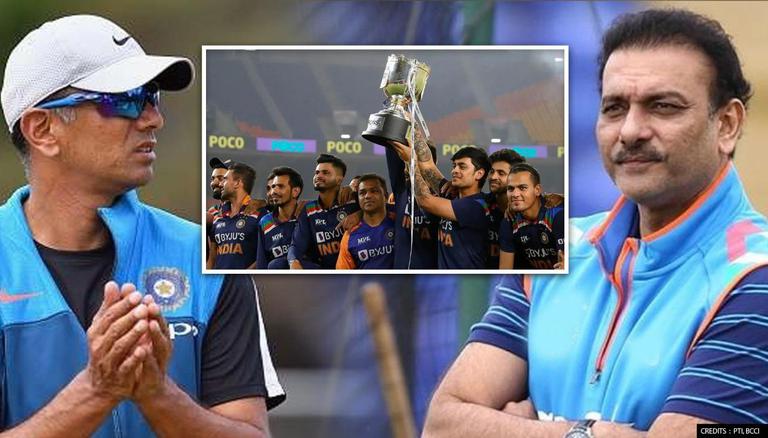 
With BCCI President Sourav Ganguly confirming that Team India will tour Sri Lanka for a limited-overs series in July, the prospective second-string squad and the management are yet to be decided upon. As the tour of the island nation is set to take place at a time when the main team will be busy with its Test appointment against England, the BCCI is expected to field a squad of 'white ball specialists' in order to clear its selection doubts for the T20 World Cup later this year. While the board is yet to name the squad and the management staff, speculations around the interim substitute of head coach Ravi Shastri have already begun.

Amongst the pool of interim coaches for the Sri Lanka tour, former India captain Rahul Dravid has come out as the frontrunner. Dravid, who has donned multiple roles for Team India throughout his career, has never been a part of the Men in Blue's managerial staff. However, the Bengaluru-lad has coached the India A and the U-19 team from 2016 to 2019 before he was appointed as the Director of Cricket Operations at the National Cricket Academy (NCA).

In the absence of Ravi Shastri and his team, the BCCI is mulling to bring Rahul Dravid on board along with his support staff from NCA to manage the team in Sri Lanka. Pertinently, it has been speculated that after Anil Kumble's departure as the Head Coach, the BCCI had offered Dravid to be at the helm of Team India, however, the former cricketer had turned down the offer citing personal reasons.

Moreover, with Virat Kohli and his limited-overs deputy Rohit Sharma being busy with the Test series against England in the UK, the BCCI could also appoint Shikhar Dhawan as the interim skipper of the team touring Sri Lanka. The limited-overs tour could also see some IPL budding stars and new faces could earn their maiden India call up.

Amongst these, Devdutt Padikkal and Chetan Sakariya are most likely to feature with the former's name also doing rounds for the England tour before the squad was announced. CSK's prodigy Ruturaj Gaikwad is also amongst those likely to receive a call. Other than the newcomers, Yuzvendra Chahal, Deepak Chahar, Pandya brothers, Suryakumar Yadav and Ishan Kishan could be on the plane to Sri Lanka.

India's tour of England will end on September 14 and with the schedule of the remainder of IPL yet to be chalked out, the BCCI would want the likes of Shikhar Dhawan, Hardik Pandya, Bhuvneshwar Kumar, Deepak Chahar, Yuzvendra Chahal to be match ready with the World Cup set to begin in October.

Team India is all set to play three one-day internationals and three T20Is as they will be touring Sri Lanka in July. As reported by ESPNcricinfo, Sri Lanka Cricket has proposed an itinerary to the BCCI and it sees both teams locking horns in three ODIs first, followed by the T20I matches. The three ODIs will be played on July 13, 16, 19 and it will be followed by the T20I series running from July 22-27.

As per the itinerary, India's white-ball squad would arrive in Sri Lanka on July 5 and will depart on July 28. Team India will have to serve a week-long quarantine which will be split into two sets. The first quarantine set says visitors have to go undergo three days of hard quarantine inside their rooms followed by four days where the squad can train but with their movement strictly restricted to just the hotel and the ground. The report also suggests that to keep the safety of the bio-bubble in mind, it is almost certain that the series will be played behind closed doors.