Known for his all-around performance on the field and off the field, Ravindra Jadeja has caught the attention of cricketing fans yet again, with his 'buddy' 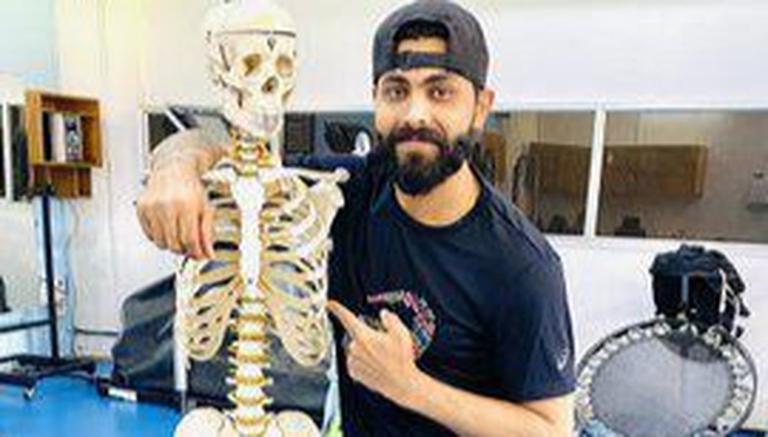 
Known for his all-around performance on the field and off the field, Ravindra Jadeja has caught the attention of cricketing fans yet again, but the reason is rather amusing this time. Taking to Twitter, the youngster posted a picture of himself with a 'buddy' of his who apparently is on a keto diet. In the picture shared by Jadeja, he was standing next to a human skeleton replica with his arms around the bony figure and wrote a caption, "My buddy after keto diet". Check out the tweet below.

Jadeja's tweet has drawn hilarious reactions from his fans as some were amused by his post while some requested him to make a speedy recovery and perform for India soon. One user wrote, "Jadeja with a random Viratian who is waiting for 71st century", whereas another chimed in calling the cricketer a 'legend'.

Jadeja with a random Viratian who is waiting for 71st century.

Love you sir jadeja u are legend pic.twitter.com/55JZL468Tm

Check out some of the best reactions below:

Totally in love with this picture of Sir Jadeja with Yuzi Chahal❤💫 pic.twitter.com/uS8SHXmgPH

Our reaction after seeing your meme 😎 pic.twitter.com/yiJ5b9Oki1

Jadeja's subtle dig at the trend of following the keto diet can be linked to the fact that the Ketogenic or keto diet, which is a low carb and high-fat diet offering many health benefits, was the most searched online, according to Google’s annual 'Year In Search' report 2021.

Jadeja- Rohit on a journey to recovery

After sustaining a knee injury during the Test series against New Zealand last year, the 33-year-old underwent rehabilitation at Bengaluru's National Cricket Academy (NCA). Owing to his injury, Jadeja is missing out on India's ongoing Test series with South Africa along with India's ODI captain Rohit Sharma who had also joined the former due to a hamstring injury. The new white-ball captain was recently seen in a picture shared by Shikhar Dhawan after a training session.

Great to see these two champions 🤗 Training with them is always fun 😁 pic.twitter.com/mpexyHR6of