RCB Blue Jersey 2021 will be similar to the colour of the PPE kits that the frontline warriors have been wearing during the time of COVID-19. 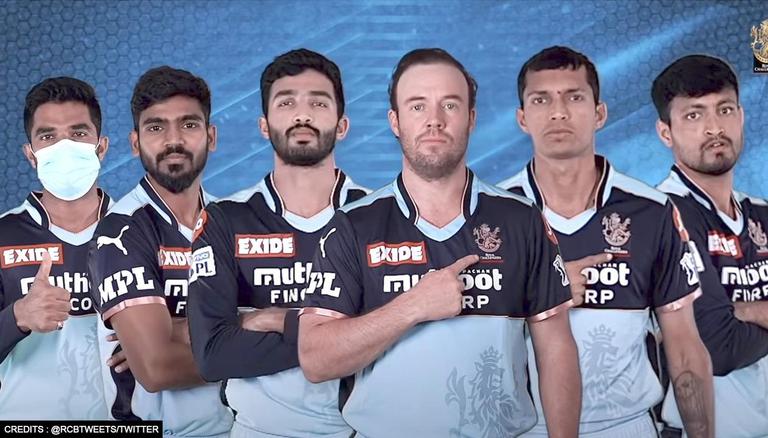 
The Royal Challengers Bangalore, over the years, has always come ahead and showed their support towards the various causes. The first time that RCB changed the colour of their jersey was in 2011 to support the 'Go Green' initiative, and since then, they have been wearing the jersey for at least one match every season. Last year the RCB team had paid tributes to the COVID warriors throughout the 13th edition of the tournament by wearing a jersey that had ‘My COVID heroes’ written on the back on both training sessions and the tournament matches. This year during the IPL 2021 phase 2 in UAE, the Virat Kohli led franchisee will be supporting the Healthline workers with a new jersey colour.

On Tuesday, the RCB social media posted a tweet announcing that the team will be sporting a Blue jersey supporting frontline workers. RCB Blue Jersey 2021 will be similar to the colour of the PPE kits that the frontline warriors have been wearing during the time of COVID-19. Fans can watch RCB wearing a Blue jersey in the opening match of the second leg against the Kolkata Knight Riders. The RCB vs KKR match is scheduled to take place on September 20.

We at RCB are honoured to sport the Blue kit, that resembles the colour of the PPE kits of the frontline warriors, to pay tribute to their invaluable service while leading the fight against the Covid pandemic.#PlayBold #1Team1Fight pic.twitter.com/r0NPBdybAS

The Kohli-led RCB team are currently third on the points table with five wins from seven games as they began their quest for their main title in phase 2. The team would be eager to get the UAE leg off to a winning start and take one step closer to making the playoffs.

RCB skipper Virat Kohli is looking forward to leading the team in IPL 2021 after ending the England vs India Test series prematurely. Kohli said, "It's going to be an exciting phase and a very important one for us at RCB and then for the Indian team at the T20 World Cup."

When asked about the team's new additions, the Royal Challengers Bangalore skipper said that he has been in touch with everyone over the last month or so. While he regrets replacing the key players, he insists that the replacements are 'top-quality cricketers. For the second phase of IPL 2021, RCB will welcome the likes of leg spinner Wanindu Hasaranga and batsman Tim David to the squad.

READ | Yuzvendra Chahal says he will 'retire at RCB'; insists he isn't worried about WC snub