As soon as it started raining at the Trent Bridge, Rishabh Pant and KL Rahul ran towards the pavilion and both the batsmen put their bats inside their jumpers 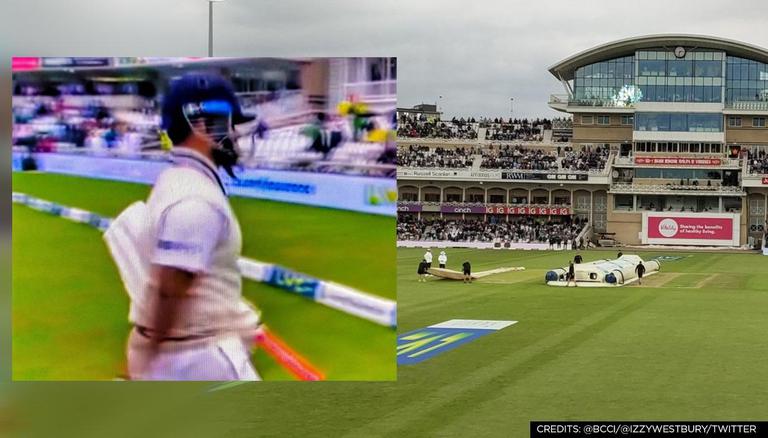 
India vs England day 2 was called off as the weather of the United Kingdom (UK) again played a spoilsport on Thursday. Before the rain arrived and the match was abruptly stopped, India was trailing by 58 runs. Team India's started solidly as both KL Rahul and Rohit Sharma played with positive intent. However, Rohit Sharma was dismissed when he tried to hook the ball for six. Soon, James Anderson brought back England into the game as he dismissed both Cheteshwar Pujara and Virat Kohli back to back. Ajinkya Rahane too perished soon as was run-out on 5.

Rishabh Pant protects his bat under his jumper

As soon as it started raining at the Trent Bridge, Rishabh Pant and KL Rahul ran towards the pavilion and both the batsmen put their bats inside their jumpers in order to protect it from water. The following awareness by Pant and Rahul has now been praised on Twitter.

UPDATE: Play on Day 2 has been abandoned at Trent Bridge! #TeamIndia will resume Day 3 at 125/4. #ENGvIND

Rishabh Pant protecting his bat with his jumper means he has won Test cricket for the year.

James Anderson once again got Virat Kohli in a mesmerising spell that undid India's solid opening stand to leave them tottering at 125 for four against England on a rain-curtailed day two of the opening Test.

The 39-year-old Anderson (13.4-7-15-2) swung it in England's favour with successive precision deliveries that got Cheteshwar Pujara (4) and Virat Kohli (0) as India from 97 for no loss slumped to 112 for four in a space of less than six overs.

The in-form KL Rahul (57 batting off 151 balls) is still standing tall amid ruins alongside Rishabh Pant (7 batting) but the advantage that India got in the opening session was neutralised by Anderson's spell and the pressure also led to an unfortunate run-out of Ajinkya Rahane (5).

Rahul's classy Test match batting would surely be a relief for the Indian team management after the talented Karnataka batsman lost his place in the longest formats due to a prolonged bad patch. He could have also been Anderson's third victim but was dropped in the slips, his only batting glitch on the day.

The nine fours, mostly drives, were majestic and the control over his own mind while selecting the bad balls under overcast conditions was exemplary.

But Anderson did take the cake on the day the pacer with the highest number of Test matches under his belt (163rd game) equalled Anil Kumble's record of 619 scalps. He matched Kumble's record after fooling the Indian captain once again in the corridor of uncertainty.

Team India had one of its best opening stands in recent tours of England before Rohit Sharma's (36 off 107 balls) now familiar propensity to pull brought about his downfall at the stroke of lunch.

The opening duo did well enough to keep the four-pronged home team attack at bay but Rohit's attempt to dispatch Robinson's short ball behind the square leg boundary didn't quite work out as he threw it away after doing all the hard work.

The partnership certainly put England on the back-foot with a deep point being stationed at times to stop the flow of boundaries.

They patiently waited for the loose deliveries and played some delightful drives, keeping the scoreboard ticking with Rahul blending his caution and aggression in equal measure to remain undefeated.

Their game plan was simple and that was to see off the first hour with minimum risks. Rohit, in particular, showed his technical prowess getting right behind the moving deliveries.

READ | England's Jofra Archer ruled out for rest of the year; will miss T20 World Cup and Ashes

Rahul, who came into the match with runs behind his back, was on 11 in his first 60 balls but then hit some exquisite square and cover drives when the ball stopped moving around after the 30-over mark.

He understood that he had the game to accelerate and did just that during the last 45 minutes. Once Sam Curran came into the bowl, the lack of express pace helped them as both lunged forward with pronounced front-press to beat the off-side cordon.

READ | England vs India: Virat Kohli out on 1st ball; has most golden ducks by an Indian skipper

However, on the third day, he would perhaps need to start from scratch after multiple interruptions in play and get a big one.

WE RECOMMEND
Ravi Shastri welcomes 'Baazigar' Rishabh Pant with garland as he recovers from COVID
Steve Smith reveals one shot that he would like to steal from Rishabh Pant
Ganguly defends Rishabh Pant's no-mask look at Euro 2020 as latter tests COVID positive
England vs India: Visitors on top as hosts bundled out for 183 runs in the first innings
Technique from Kohli, analysis from Rohit...: Rishabh Pant on what he picks up from whom