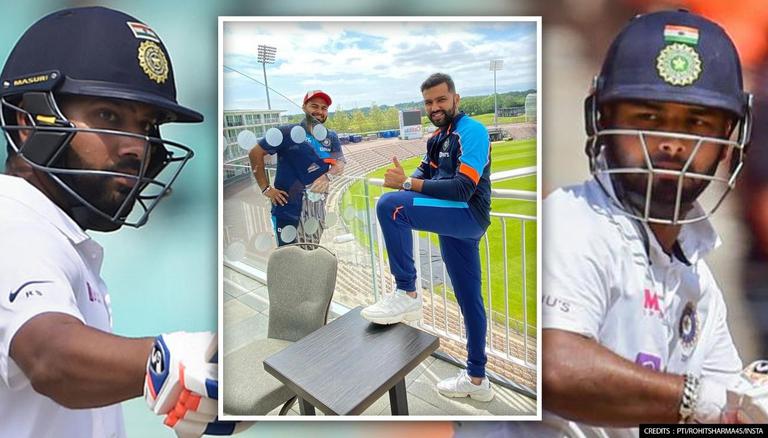 
The Indian men's and women's cricket teams on Thursday arrived in London ahead of the World Test Championship (WTC) final and England series. Virat Kohli & Co. will be playing the first-ever ICC World Test Championship Final against New Zealand at the Ageas Bowl, Southampton, starting from June 18. Following the WTC final, Team India will also play a 5-match Test series against England. After reaching England, Team India's opener Rohit Sharma dropped a picture of him along with star wicket-keeper batsman Rishabh Pant on his Instagram. In April 2020, Rishabh Pant and Rohit Sharma's friendly banter on a video chat went viral in which the wicket-keeper batsman challenged Rohit Sharma for a six-hitting competition. During a live chat between Rohit Sharma and Jasprit Bumrah, which was shared live on Instagram, Rishabh Pant commented and threw a challenge to the 'Hitman'. The challenge was to see who, between them, can hit the biggest sixer. During the live interaction, Jasprit Bumrah conveyed the biggest six-hitting competition challenge to the Indian opener, who was surprised for a bit before savagely replying to the challenge, that it is too early for Rishabh Pant to challenge a senior player like Rohit.

After the WTC final, the men's team will gear up for the five-match Test series against England while the women's team will lock horns in three ODIs beginning June 27 with the matches slated to be played in Bristol, Taunton, and Worcester. Both teams will then square off in three T20Is, beginning July 9 and the three matches will be played at Northampton, Hove, and Chelmsford.
Prior to departing for England, India head coach Ravi Shastri on Wednesday said that going ahead, the International Cricket Council (ICC) should look to make the final of the WTC final a best-of-three contest and it could be played like a three-match series.

Meanwhile, Team India will now proceed directly to the on-site hotel at the Hampshire Bowl where they will be tested again before commencing a period of managed isolation.  Regular tests will be conducted during the period of isolation. Players' activity will be allowed in a gradually increasing manner after each round of negative testing, moving from exercise in isolation to small group and then larger squad activity, whilst always remaining within the bio-secure venue.