Rohit Sharma was trolled by fans after he was dismissed for a duck in the practice game against South Africa on. He was leading India's Board President's XI.

Rohit Sharma has been selected as an opener for the upcoming three-match Test series against South Africa which starts from October 2. While selecting the team for the longest format of the game, chief selector MSK Prasad had said that he and the selection committee were planning on taking Rohit Sharma as an opener as KL Rahul's poor performances in the previous matches have led them to this decision. Prasad also added that  KL Rahul is going through a tough time and needs some time to regain his form.  Meanwhile, it seems that Rohit Sharma's preparations for the Test series is not going in his favor as the 'Hitman' was dismissed for a duck in the practice match.

READ: Harbhajan Singh wants Suryakumar Yadav to be picked for Men in Blue

Rohit Sharma had a forgettable outing as an opener in the practice game. He was leading  India's Board President's XI against South Africa at Vizianagaram on Saturday. He was opening the innings along with Mayank Agarwal. However, Sharma's comeback to the red-ball cricket was not a good one as he could last for only two deliveries and his stay in the middle was ended by Vernon Philander for a duck. As soon as the fans came to know about it, they came forward and brutally trolled the Hitman on social media. Here are some of the reactions. 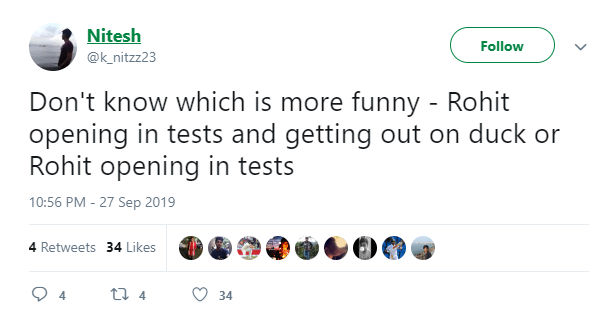 The Proteas had leveled the three-match  T20Iseries 1-1 as opposition captain Quinton de Kock was adjudged Man of the Series for an unbeaten 79 from 52 deliveries.  India will now gear up to take on the South Africans for the upcoming Test series which will be played on home soil. The three-match Test series will be a part of the ICC World Test Championship campaign for both sides. At the same time, this will also be the Team India's first home Test series this year. India are currently the top-ranked Test side and are also leading the ICC World Championship points table with 120 points after having won both their away matches against West Indies whom they had whitewashed in across all formats.