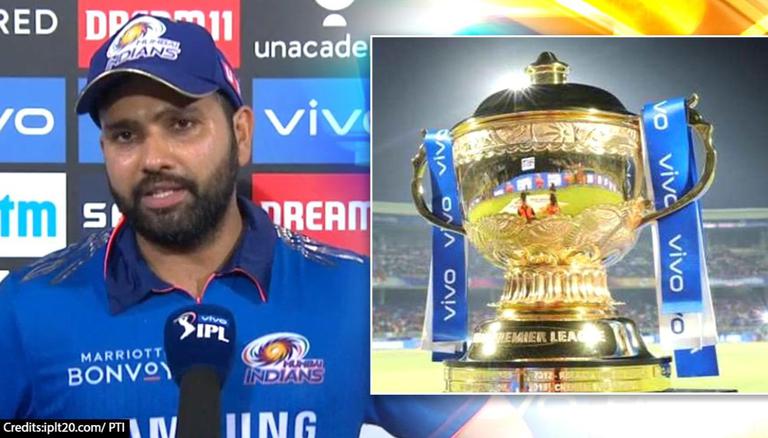 
After the COVID-19 pandemic infiltrated the secure bio-bubble zone of the various franchises, BCCI along with the IPL Governing Council suspended the Indian Premier League (IPL) 2021 till further notice. The decision of the Indian cricket board came after KKR players Varun Chakravarthy and Sandeep Warrier, as well as CSK team 2021 CEO Kasi Viswanathan, bowling coach Lakshimpathy Balaji and a bus cleaner tested positive for COVID-19. Now, Mumbai Indians have shared a video on its Twitter handle in which skipper Rohit Sharma and other players have backed the board's decision to halt the IPL 2021.

In a video shared by Mumbai Indians on its Twitter handle, Rohit Sharma said, "It's unfortunate that the tournament has been postponed. But in the light of everything that is happening around the country, I think it's a very good decision. It's very very important that we all look after each other. It's a very serious matter. So please follow all the protocols, guidelines and stay disciplined.  "

The video also featured other Mumbai Indians' players and support staff. MI's spearhead Jasprit Bumrah said, "It's unfortunate that the tournament had to stop midway but I think it was in everybody's best interest to take care of everybody's safety and well-being."

MI's off-spinner Jayant Yadav said, "I feel it is in the best interest of everyone involved- the players, the management, and the support staff as well."

New Zealand speedster Adam Milne said, "The health and safety of all players in the whole competition is paramount and the right decision has been made by the BCCI and all the teams."

'IPL 2021 should never have been held in India'- Nasser Hussain

Meanwhile, Former England captain Nasser Hussain has said that the 14th edition of the Indian Premier League (IPL) had to be called off given the dire situation in India, where lakhs of people are contracting the COVID-19 virus each day. Nasser said that BCCI conducted a successful IPL last year in UAE, which should have been the norm for this year too. However, the former England skipper highlighted that nobody could have predicted the second wave to be so deadly and like everyone else BCCI may have thought that the country was already through the worst of the pandemic. Nasser said he understands where the decision to stage the IPL in India may have stemmed from, adding "there was no other option than to call-off the tournament".

WE RECOMMEND
IPL 2021 suspended news turns into blessing in disguise for broadcasters; here is why
Who is winner of IPL 2021? How will IPL 2021 winner be declared?
MS Dhoni's latest IPL 2021 gesture is set to win fans' hearts; more details revealed
IPL 2021: Which team has most number of followers on Facebook? Answer surprises fans
IPL 2021 postponed: BCCI reveals bookies' shocking way of using Delhi match for corruption