Rohit Sharma posted an adorable picture of his daughter Samaira on his Instagram story, revealing how the toddler is keeping busy during the lockdown. 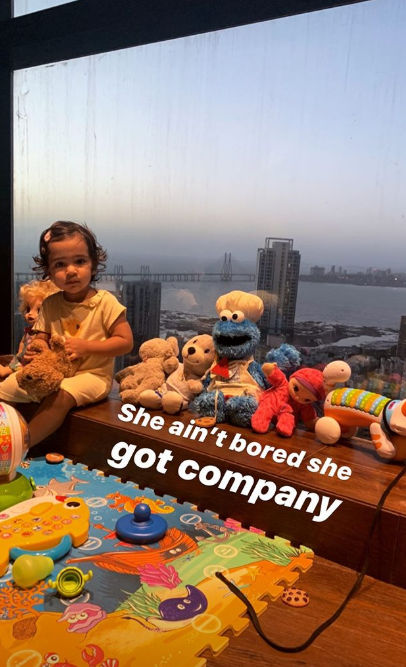 On Friday, the Mumbai Indians captain Rohit Sharma shared a charming picture of his daughter Samaira playing with her stuffed toys by a window at home. The IPL superstar captioned the story with the text,' She ain't bored she got company'. Rohit Sharma daughter, Samaira has been busy featuring on the MI captain's social media, gaining adoration from many of her father's followers as well his teammates. Only last month, another Mumbai Indians star Jasprit Bumrah uploaded an adorable video of Samaira.

The coronavirus crisis has wreaked havoc on major sporting events all over the globe including the IPL. However, this has allowed Rohit Sharma to spend some much-needed family time with his wife and daughter at home. The trio has kept busy watching TV shows, playing puzzles and even cooking together during the lockdown.

Rohit Sharma was all set to lead the Mumbai Indians in IPL 2020 as they looked to add to their already decorated trophy cabinet. The right-handed Indian batsman has featured in 188 matches across 12 IPL seasons and amassed a staggering 4,898 runs averaging 31.60 and with a commendable strike rate of 130.82. The 33-year-old Rohit Sharma has also recorded one century and thirty-six half-centuries in the grand tournament winning the IPL a record 5 times, on four occasions with Mumbai Indians, most recently in 2019.

PEOPLE HAVE PLEDGED SO FAR
LATEST NEWS
View all
14 hours ago
Ishant Sharma reveals why he made fun of Steve Smith during the 2017 Bengaluru Test
17 hours ago
Ishant Sharma reveals why he had to borrow Zaheer Khan's shoes before his ODI debut
15 hours ago
Suresh Raina reveals how Sachin Tendulkar had motivated him during 2011 WC quarterfinal
3 hours ago
'I was always in his ear': Virat Kohli thinks MS Dhoni observing him led to Captaincy nod
15 hours ago
Sourav Ganguly calls for adaptability and self motivation keys to success against all odds