Sachin Tendulkar Mourns Loss Of Dilip Kumar, Says 'There Will Never Be Another Like You' 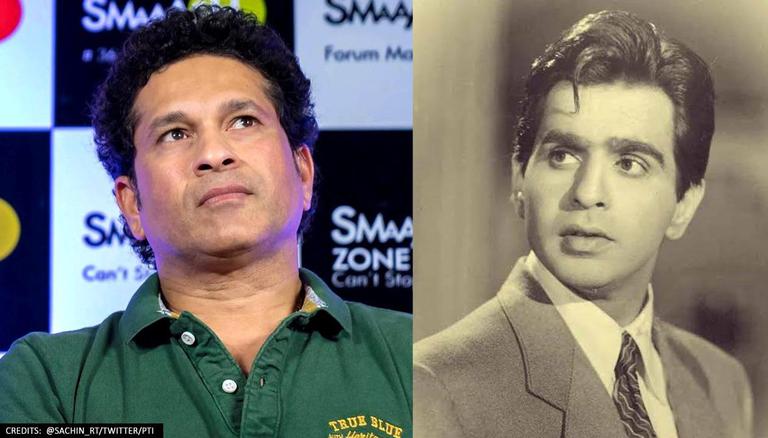 
Master Blaster Sachin Tendulkar has come forward and offered his last respects to legendary actor Dilip Kumar who passed away on Wednesday morning at the age of 98.

The Padma Vibhushan recipient was admitted to the Hinduja Hospital in Mumbai after complaining of breathlessness. The news was confirmed by Dr Jaleel Parkar, the pulmonologist who was treating the lead actor. Later one of his family friends Faisal Farooqui tweeted from the actor's official Twitter handle.

Taking to the micro-blogging site, Sachin Tendulkar remembered the deceased actor by saying that there will never be another like Dilip Kumar.

Furthermore, Tendulkar also mentioned that the 'Madhumati' actor's contribution to Indian cinema is unparalleled and he will be missed dearly. The 2011 World Cup winner concluded by offering his heartfelt condolences to the late actor's wife & yesteryear actress Saira Banu and the family.

Rest in Peace Dilip Kumar ji!
There will never be another like you.

Your contribution to Indian cinema is unparalleled and you’ll be missed dearly. My heartfelt condolences to Saira Banu ji & the family. 🙏🏼 pic.twitter.com/9yw80eTegZ

Apart from Sachin Tendulkar, others from the cricketing fraternity including Virat Kohli, Harbhajan Singh, and, Yuvraj Singh also paid their last tribute to the 'Devdas' star.

Deeply saddened to hear about the demise of Dilip Kumar ji. Another legend passes, marking the end of an era.

His contribution to cinema is unmatched and unprecedented.  My deepest condolences to the family 🙏🏻 pic.twitter.com/eWnPNbemEO

Deeply saddened by the passing of Dilip Sahab. A genius actor who made such a huge impact in Indian cinema. An inspiration for generations to come. 🙏 #DilipKumar pic.twitter.com/hABPsu3WVR

Today, an icon who was loved by generations passes away. Rest in peace Dilip ji. My condolences to the family 🙏

Dilip Kumar's funeral to take place at Santacruz in Mumbai

The family informed that the last rites will be held at 5 pm at Juhu Qabrastan at Santacruz Mumbai. Dilip Kumar had been admitted to the intensive care unit (ICU) of a Mumbai hospital, has shown improvement in his health, his wife Saira Banu said on July 5... The 98-year-old screen icon was admitted to suburban Khar-based Hinduja Hospital, a non-COVID-19 facility, last week to address age-related "medical issues" days after being discharged from the same hospital.

Known as the 'Tragedy King of Bollywood', veteran actor Dilip Kumar was one of the greatest actors in the history of Indian Cinema.

Dilip Kumar’s real name is Mohammad Yusuf Khan. As per reports, Dilip Kumar was also the first superstar who had successfully won the trophy for the Best Actor in Filmfare Award.

Dilip made his debut in the movie Jwar Bhata (1944) on the recommendation of iconic star Ashok Kumar, who was his mentor in the initial days of his career.