Sachin Tendulkar scored his first-ever ODI ton in a match against Australia in Colombo, 27 years ago, on September 9. He made his ODI debut in 1989. 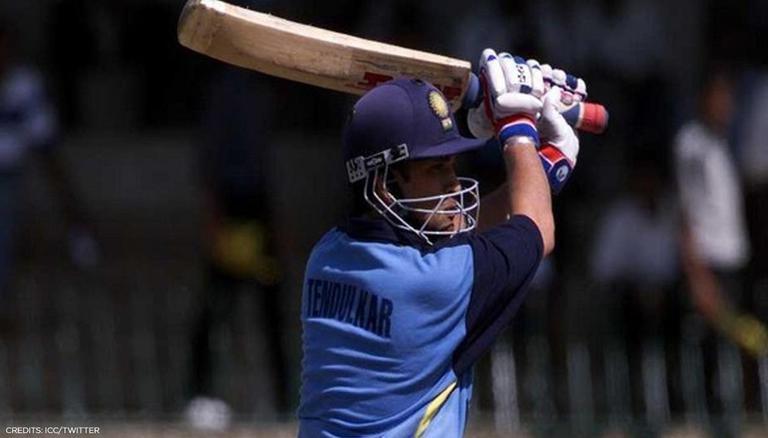 
Legendary India cricketer Sachin Tendulkar scored his first ODI hundred of 110 runs in his 79th ODI match against Australia on September 9, 27 years ago. After making his debut against Pakistan in 1989, it took Tendulkar 5 years to reach the first of his 49 One Day International centuries. The match in which the legend reached this milestone was being played at the R. Premadasa stadium as a part of the quadrangular series named Singer World Series, being played between Australia, Sri Lanka, Pakistan, and India.

And the rest, as they say, is history! 🙌 🙌#TeamIndia pic.twitter.com/owcFEXUfBE

Tendulkar took 130 balls to score 110 runs during his 184 minutes of stay at the crease. He reached his ton with the help of eight fours and two sixes at a strike rate of 84.61. He returned to the pavilion after getting bowled by CJ McDermott. Before getting dismissed Tendulkar played the role of an anchor behind India’s win by 31 runs, as Australia were bowled out at a score of 215 while chasing a target of 247 runs. He was also awarded the Player of the Match award for his brilliant knock. At the time of scoring his first ODI century, Tendulkar was only 21 years old. However, he had already scored his first International century against Pakistan in 1990.

#OnThisDay in 1994 @sachin_rt scored his #MaidenODICentury against Australia at the Premadasa Stadium in Colombo. pic.twitter.com/VxZe7B5ZnP

Tendulkar scored his first International century against England in 1990

Regarded as one of the greatest ODI batsmen of all time, Sachin Tendulkar scored a total of 49 ODI centuries and 51 Test centuries in his career. He made his international debut in the first Test against Pakistan in Karachi during India’s tour of Pakistan at the age of sixteen in 1989. It took him eight Tests to score his first International and Test century, as he hit an innings of 119 not-out against England at the Manchester in 1990. He also became the third-youngest batsman to score a Test ton. At the end of his Test career in 2013, Tendulkar had hit a total of 15921 runs and scored 51 Test centuries along the way, which is the most by any player. The same goes for his record in ODI, as he amassed a total of 18426 runs in his ODI career and 49 ODI century. He reached his 100th International century by knocking 114 runs against Bangladesh in 2012.