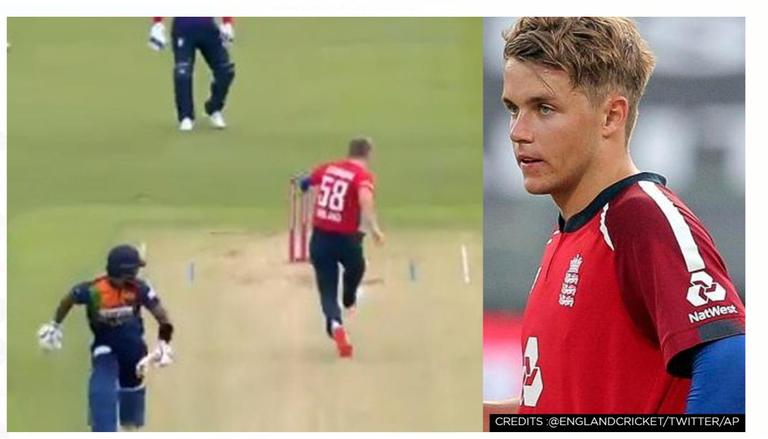 
England registered a comfortable five-wicket win over Sri Lanka via DLS Method in the rain-curtailed second T20I at the Sophia Gardens in Cardiff on Thursday and by the virtue of this win, Morgan & Co. have taken an unassailable 2-0 lead in the three-match series.

However, it was young all-rounder Sam Curran's brilliant athleticism that stood out from the rest as brought Euro 2020 on the cricket field by effecting an incredible run-out.

It all happened in the second over of the Sri Lanka innings. Opener Avishka Fernando nudged the ball and set off for a single which was never there. Curran sprinted to fetch the ball but realized it would take time for him to pick up and throw it which is why he kicked the ball and hit the bullseye to send Danushka Gunathilaka packing for just three runs to his name.

While Sam Curran's football skills left the viewers amazed, one of the commentators asked for Sam Curran's inclusion in the England national football team for Euro 2020.

Once Sam Curran went through the video of his own outstanding performance, he took to his official Twitter handle and wondered whether there is any space in the squad for next Tuesday.

Even the passionate fans seemed desperate to see Sam Curran don the English team's football jersey. Here are some of the reactions.

Only if you are a right back

Can you play right back? We’re short in that department

Southgate will play you as a RB.

Can you play RW?

England will be facing the 2014 world champions Germany in the UEFA Euro 2020 Round of 16 clash at the iconic Wembley Stadium in London.

Here is England's squad that is participating in the ongoing Euro 2020:

Having won the toss, Sri Lanka decided to bat first. The visitors got off to a nightmarish start as they lost both the openers in 3.3 overs with just 18 runs on the board. Skipper Kusal Perera and Kusal Mendis formed a 50-run partnership before the former was dismissed for 21. What followed was a flurry of wickets as Sri Lanka posted a paltry 111/7 in their 20 overs. Mark Wood and Adil Rashid grabbed two wickets each whereas Sam Curran and Chris Jordan also bagged one wicket apiece.

In reply,  England were reduced to 36/4 after 6.3 overs. However, the hosts' middle-order came to their rescue. Sam Billings, Liam Livingstone, and Sam Curran scored 24, 29, and 11 respectively to help their side register a comfortable win and also clinch the series. Liam Livingstone was named the 'Player of the Match' for his knock of 29 off 26 balls which included a six. The third T20I will be played on Saturday, June 26 at The Rose Bowl in Southampton. The T20I series will be followed by a three-match ODI series starting June 29.