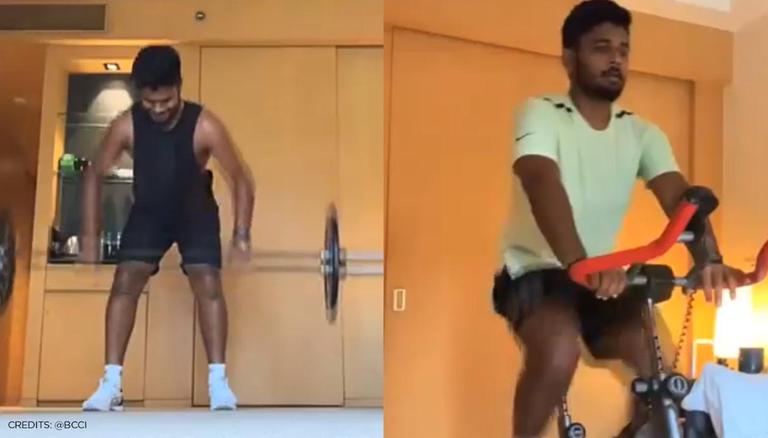 
Sanju Samson seems to be in the perfect frame of mind ahead of the upcoming away limited-overs series against Sri Lanka starting July 13. Samson has succeeded in finding a place in the Indian squad as the wicket-keeper batsman along with youngsters Ishan Kishan.

In a video posted by the Board of Control for Cricket in India (BCCI) on their official Twitter handle, the Kerala wicket-keeper batsman can be seen working out rigorously as he looks to rediscover his rhythm and get back into the groove ahead of the Sri Lanka series.

In the next segment, Sanju Samson looks forward to having a healthy lunch and the food items on the table include dal, roti, soya kheema, etc. Sanju can then be seen enjoying a cycling session in the evening after which he goes out to get drenched in the rain. In the end, the limited-overs stumper has an ice bath and then proceeds to have his dinner.

READ | Sanju Samson, Chris Morris engage in banter over that run not taken against Punjab: Watch

DO NOT MISS as @IamSanjuSamson gives us a sneak peek into his quarantine life ahead of #TeamIndia's Sri Lanka tour. 👌 👌

Meanwhile, it remains to be seen whether Sanju Samson or Ishan Kishan gets to don the gloves in the upcoming series.

With the full-strength Indian squad in the United Kingdom for a three-and-a-half-month long tour, the Board of Control for Cricket in India (BCCI) has sent a team of white-ball specialists for an away limited-overs series against Sri Lanka starting July 13 where the Men In Blue are scheduled to play three ODIs and as manyT20Is. India will be led by opener Shikhar Dhawan while pacer Bhuvaneshwar Kumar has been named his deputy for that particular series.