Sanju Samson Will Look Back And Get Disappointed By His Performance: Rahul Dravid

Sanju Samson, who scored some crucial runs in the third ODI against Sri Lanka, failed to put up a good performance throughout the three-match T20I series. 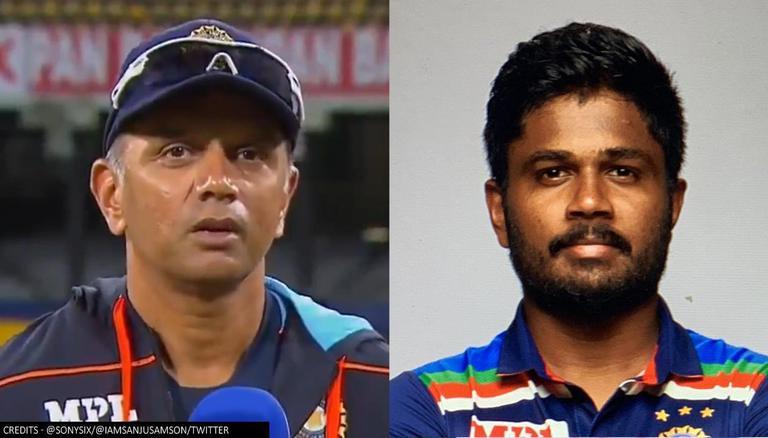 
Former Indian Cricketer Rahul Dravid, who recently travelled to Sri Lanka with India's white-ball team as Head Coach, has spoken about Sanju Samson's poor performance in the T20I series. Dravid told ANI in a virtual press conference that the batting conditions in Sri Lanka were not ideal but Sanju got off to a good start in the third ODI, scoring 46 runs. Dravid said it is unfortunate that Sanju couldn't perform in the T20I series. Dravid said Sanju himself will look back and be disappointed by his performance. Dravid described the new-look team as "talented kids", adding, "We need to be patient with them."

'Team did not bat well'

The wicketkeeper-batsman, who scored some crucial runs in the third ODI against Sri Lanka, failed to put up a good performance throughout the three-match T20I series. Sanju scored 34 runs in three innings, with the highest being 27 in the first match. Sanju was dismissed for a golden duck in the third and final T20I against the hosts, at a time when India desperately needed a partnership. India eventually lost the match, and thus the series, 2-1, to a second-string Sri Lankan team. Dravid said the team did not bat well in the third match and Wanindu Hasaranga was exceptional with the ball.

Hasaranga had picked 4 wickets in the final T20I to demolish the Indian batting line-up like a house of cards. Hasaranga was adjudged both player of the match and player of the series for his outstanding performance. Dravid said 81 runs was never going to be a strong total to defend, adding, "Sometimes in challenging conditions you need to fight your way and make it to 130-140." Nonetheless, Dravid said the tour has been a great learning experience for Indian youngsters.

Sri Lanka easily chased down a low target of 81 runs with 33 balls to spare, and India lost the third T20I by 7 wickets. India won the first match convincingly but lost the next two due to several last-minute changes brought about by COVID-19 detection inside the camp.