Sara Tendulkar comes out in support of Arjun Tendulkar after the latter received criticism online after being picked up by Mumbai Indians in the IPL auction.

There was a significant buzz around when it was revealed that Arjun Tendulkar was going to be a part of the auction for the Indian Premier League. While his father Sachin Tendulkar established himself as the most prolific run-scorer in the history of the game, the 21-year-old chose to be a fast bowler.

It was speculated that Mumbai Indians will be keen to sign the left-arm pacer in the mini-auction, and the franchise unsurprisingly acquired the player's services for â‚¹20 lakh.

Arjun Tendulkar IPL 2021: Sara Tendulkar comes out in support of her brother

Sachin Tendulkar is considered one of the most celebrated names in world cricket. Moreover, the ex-India player also shares a great camaraderie with the owners of Mumbai Indians and has also served as the mentor for the side in the past after his retirement. Many are of the opinion that the franchise went after Arjun Tendulkar because of the same reason.

Arjun Tendulkar, who just made his Mumbai debut in the recently concluded Syed Mushtaq Ali Trophy, was targeted by netizens on social media. The seamer was also subjected to nepotism trolls online, as a certain section of fans opined that he was rewarded with an IPL contract because of Sachin Tendulkar, and not for his cricketing merit. Sara Tendulkar took to her Instagram account to congratulate her brother. She also stated how nobody can take this achievement away from Arjun. 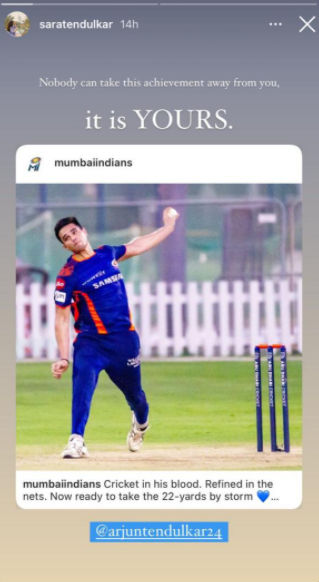 Arjun Tendulkar was associated with the Mumbai Indians franchise last year as well but as a net bowler. The team management has shown faith in the talented youngster and handed him a contract for the forthcoming edition of the cash-rich league. However, it remains to be seen if the fast bowler is able to carve a niche for himself in the stellar squad.

Defending champions Mumbai Indians have emerged to be one of the most dominant teams in the history of the competition. They decided to stick with the majority of their core players ahead of the IPL 2021 auction. They have further strengthened their star-studded line-up by adding some more notable names of white-ball cricket.