Sehwag Faces Fans' Wrath Over Derogatory Remark On Virat Kohli: 'This Is So Cheap'

Sehwag's remark didn't sit well with fans, who blasted the former opener on SM. Some even demanded that Sehwag be kicked off the commentary team. 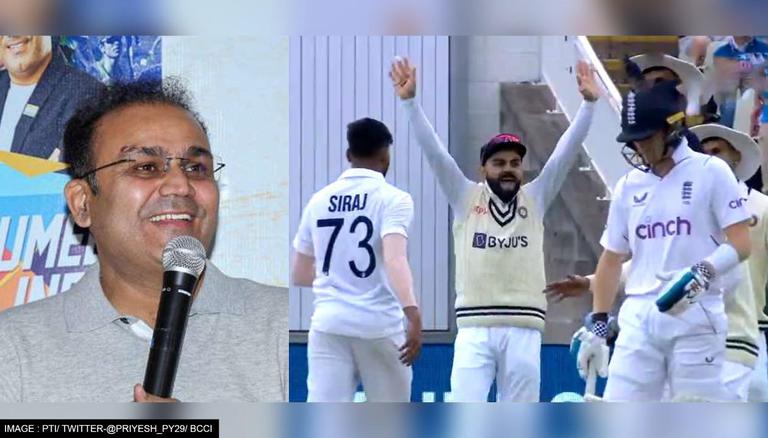 
Former India cricketer Virender Sehwag became the target of the fury of the fans for making a derogatory statement about Virat Kohli on Sunday. Sehwag, a member of the commentary panel for the fifth Test between India and England, referred to Kohli as a "chamiya" after the latter was spotted dancing in celebration following Sam Billings' dismissal on Day 3 of the one-off Test. The incident occurred when Mohammed Siraj clean bowled Billings for 36 runs in the 60th over of England's first innings.

Sehwag's comment didn't sit well with Indian supporters, who blasted the former opener on social media. Sehwag came under fire from internet users for referring to Kohli as a "chamiya" on live television. Some people even demanded that Sehwag be kicked off the commentary team, calling his comments "disgraceful" and "inappropriate" for the game of cricket. "This is so cheap and unprofessional and something like this coming from a former player of the game!?" one individual wrote.

This is so cheap and unprofessional and something like this coming from a former player of the game!?
Sorry but your crappy humour won't be entertained everywhere. Apologize if you respect the game @virendersehwag https://t.co/4BSh9x0dPc

Sehwag used a slur that’s offensive. It’s not about who he said it to, it’s that the word he used is derogatory to a community that deserves just as much respect and fair treatment in society as any Kohli does. See the bigger picture and don’t protect him because he’s a legend https://t.co/bauvXiLE58

The commentary level is below average.

Reason no. 1000th for not watching matches with hindi commentary @StarSportsIndia @BCCI

@BCCI @virendersehwag
What the hell is this?????!!!
That's the reason we keep asking you to appoint professional commentators...!

Earlier, Sehwag received criticism for linking Jonny Bairstow's century to the latter's argument with Kohli. On Day 3 of the Test, Kohli and Bairstow were spotted exchanging sharp words before the latter hammered Indian bowlers all over the field to reach his 11th century in red-ball cricket. Sehwag accused Kohli of agitating Bairstow. If Kohli had not agitated Bairstow, according to Sehwag, Bairstow would have continued playing like "Pujara," but their argument has turned him into "Pant."

As far as Day 3 of the ongoing Test is concerned, Bairstow scored 106 off 140 balls to rescue England from suffering a batting collapse. However, despite Bairstow's heroics with the bat, England were bowled out for 284 runs by Indian bowlers. Mohammed Siraj, who dismissed a well-set Bairstow, picked a four-wicket haul in the innings.

India entered the second innings with a massive lead of 132 runs. Shubman Gill and Hanuma Vihari were dismissed early before Kohli and Pujara forged a crucial partnership. Kohli was then dismissed by Ben Stokes for 20 runs. Rishabh Pant joined Pujara towards the end of the third session on Day 3. They forged another partnership for India to finish at 125/3 at stumps on Day 3. Pant and Pujara will resume batting for India on Day 4 at their overnight scores of 30 and 50 runs, respectively.