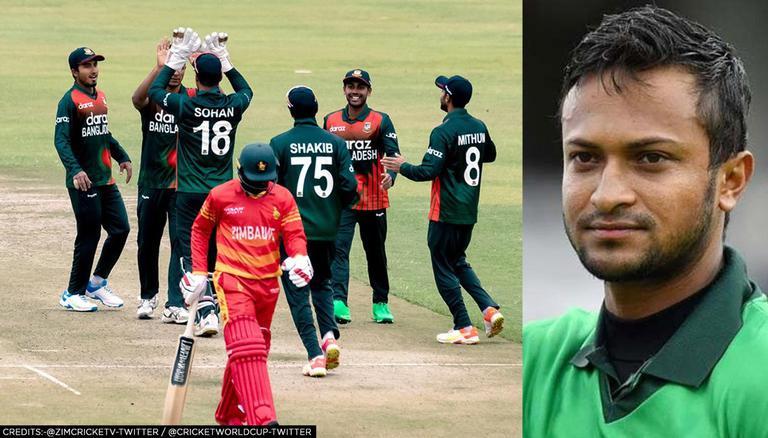 Bangladesh on Friday started their campaign against Zimbabwe on a winning note with a magnificent 155-run win against Brendon Taylor & Co. Shakib Al Hasan ended his spell with stunning figures of 3 maidens, 30 runs and 5 wickets in 9.5 overs.

The fifer against Zimbabwe on Friday was Shakib Al Hasan's third five-wicket haul in ODI. The left-arm spinning allrounder now has 274 wickets in 213 ODIs and 6,474 runs with the bat as well. Shakib is already Bangladesh's highest wicket-taker in Tests and T20Is with 210 and 92 wickets, respectively.

Bangladesh go 1-0 up in the three-match ODI series with a comprehensive 155-run victory over Zimbabwe 👏#ZIMvBAN pic.twitter.com/ljgbBaMYnO

Bangladesh opener Liton Das played a brilliant knock of 102 in 114 balls with the help of 8 boundaries. In response, Zimbabwe were bowled out for just 121 runs, with wicket-keeper Regis Chakabva top-scoring for his side with 54 runs off 51 balls studded with 4 boundaries and 2 sixes. Liton Das was named man of the match for his 102-run knock.

During the presentation ceremony, Bangladesh skipper lauded Shakib Al Hasan for his bowling and said, "I thought Zimbabwe bowled exceptionally well in the first 15 overs, but the way Liton and Mahmudullah batted and then Afif. Today was the perfect example of youngsters stepping up and putting up a good display. I was not thinking about the surface too much. Shakib bowled to the plan and we build the pressure and we got the wickets. Afif's innings was very special and Mehidy's innings was crucial too. Small contributions can make big impact."