'Shift The World Cup 2019 To...': Amitabh Bachchan Wants THIS Country To Host The Cricket Tournament. Here's Why

The ICC Men's Cricket World Cup have abandoned four matches due to rain which has exasperated the cricket enthusiasts.

The ICC Men's Cricket World Cup is in its 18th match and four matches have been abandoned due to rain which has exasperated the cricket enthusiasts, some of which even went on to call it the worst 'World Cup'.

Soon after India's match against New Zealand got abandoned on Thursday due to rain, a deluge of reactions poured in on Twitter.

Another user tweeted: "Hey @ICC @cricketworldcup need to say something, thanks for giving us the worst world cup. I am hoping rain wins the world cup #INDvsNZ."

But Amitabh Bachchan replied to one user who wrote: "Shame on #ICC for organizing such an important tournament at such a time when half the matches are getting washed away! Get a life folks, and concentrate on the right timing of the tournament rather than on the right "glove" of #Dhoni!!! #WorldCup2019"

Soon after the Netizens agreed with the actor and dropped in comments. 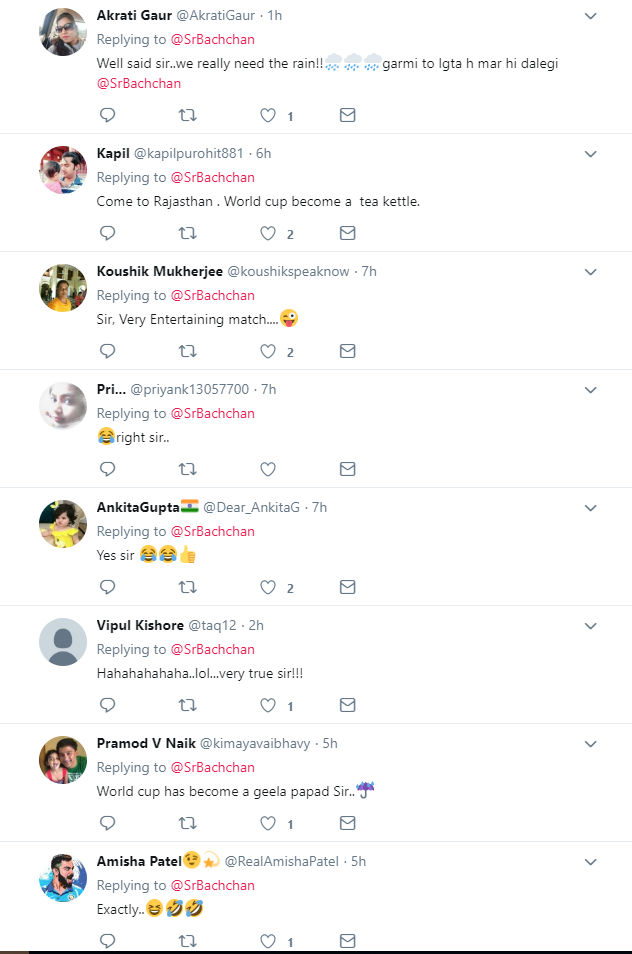 "So much disappointed with the @ICC this is'nt a kind of #WorldCup2019 we want. We want matches to be played. Here only the rain is ruling. In future never put any WC in England or shift the match to other day if rain occurs. Atleast matches shud be fair. #nomorewolrdcupinengland," another tweet read.

While some users seemed annoyed because of rain playing a spoilsport in the premier tournament, others used this opportunity for posting humourous tweets.

India and New Zealand both have not faced even a single defeat in this tournament so far and because of abandonment, both remain unbeaten. But some users said that even rain maintained its supremacy.

A user tweeted: "For 4 years, I waited to see this day. Rain with 8 points sit calm on Top of the points' table! Rest 10 teams are struggling #WelcometoCWC2019."
"#Rain is currently the table topper in #CWC19 with 8 points from 4 abandoned matches. #IndvsNZ #INDvPAK," another user tweeted.