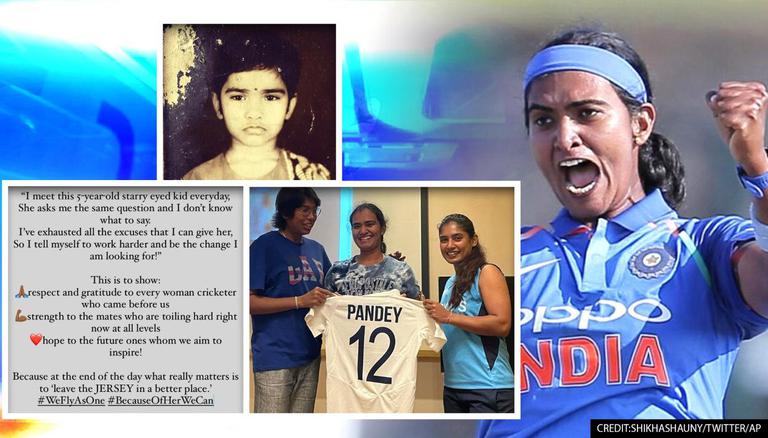 
One of Team India's senior women's cricketer Shikha Pandey has gone back in time, remembering a memory back in the day when she was five years old.

The women’s cricket team is all set to play a Test match in Bristol against England after a wait of nearly seven years. On Sunday,  the official handle of India women’s cricket team, the BCCI Women announced the new Test kit for India vs England 2021 Test as all the participating members of the national cricket team posed with their respective jerseys and Shikha Pandey was one of them.

On Monday, the senior bowler revealed that the road to success was not as smooth just says before donning the Indian Test jersey.

'The five-year-old me is thrilled to bits': Shikha Pandey

Taking to the micro-blogging site, Shikha Pandey had posted three images. In one image she is seen posing with her new Test jersey along with veterans Mithali Raj and Jhulan Goswami.

The image to the top right has a childhood picture of Shikha Pandey aged five years according to her and the image to the extreme left is an inspirational note.

However, it is the message that stands out from the rest as Shikha Pandey sets out to rewrite history with the ball in hand on English soil.

"I meet this 5-year-old starry-eyed kid every day, she asks me the same question and I don't know what to say. I've exhausted all the excuses that I can give her, so I tell myself to work harder and be the change I am looking for!" the note read. "Respect and gratitude to every woman cricketer who came before us, strength to the mates who are toiling hard right now at all levels. Hope to the future ones whom we aim to inspire!", it added.

"Because at the end of the day what really matters is to 'leave the JERSEY in a better place', " Shikha Pandey concluded.

The netizens were both impressed as well as inspired after reading Shikha Pandey's note and here's what they had to tell the 'inspirational cricketer.

You are like my inspiration to be a fast bowler🙏🏻..Waiting to watch and learn from u more

All your smiles are big and always have them on your face.
Good inspiration @shikhashauny di.
We count on all girls that they will leave the jersey in a better place. Congratulations for the legendary test jersey and good luck.
5⃣to3⃣2⃣ One aim, one ambition@M_Raj03 @JhulanG10

❤
All The Best for the entire series against England 🤗

The India women's cricket team is scheduled to tour England for a one-off Test match against the England women's team that will be followed by three One Day Internationals and three T20Is from 16 June to 15 July 2021. Veteran Mithali Raj will be leading the Indian eves in the Test match and the ODI series while Harmanpreet Kaur will be captaining the side in the T20 Internationals.

The Indian women's cricket team had last played a Test match in November 2014, against South Africa.