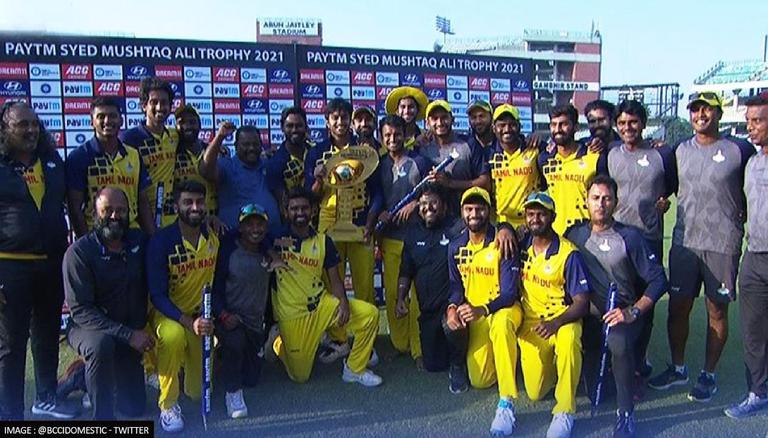 The team celebrated their SMAT victory in typical fashion by dancing to the famous Tamil song 'Vaathi Coming' from the movie Master.

After a difficult Syed Mushtaq Ali Trophy campaign, Tamil Nadu players rejoiced by celebrating their title on Monday. In a video that has gone viral, captain Vijay Shankar led the celebrations, while the rest of the team joined him soon after. Previously, Tamil Nadu skipper Dinesh Karthik had performed the same celebration with the team after winning the 2020/21 title.

Great to see TN boys continuing the tradition of celebrating #SyedMushtaqAli title with a #VaathiComing dance with the captain leading from the front. For the 2020 season title, it was DK. This time, it's Vijay Shankar. #Master pic.twitter.com/YRudWjyQS8

This was Tamil Nadu's 3rd SMAT title and the second in a row. They won their first Syed Mushtaq Ali Trophy in the inaugural 2006/07 season, where they defeated Punjab in the final.

The Tamil Nadu vs Karnataka final was one of the most entertaining matches in the history of the Syed Mushtaq Ali Trophy as the former defeated the latter in the last ball of the game.

Having batted first, Karnataka posted 152 runs on the board after a slow start, with the likes of Abhinav Manohar and Praveen Dubey finishing the team's innings on a high. Manohar scored 46 runs off 37 deliveries, an innings that included four boundaries and two sixes. Dubey, on the other hand, scored 33 runs off 25 balls including three boundaries and a six.

In response, Tamil Nadu chased down the target in 20 overs, thanks to a fantastic knock by Shahrukh Khan, who finished off the game in the final ball of the final. Openers Hari Nishanth and Narayan Jagadeesan laid the foundation of the chase by scoring 23 and 36 respectively.

After the likes of Sai Sudharsan, Vijay Shankar and Sanjay Yadav were dismissed in quick succession, Shahrukh Khan smacked 33 runs off just 15 deliveries, hitting one four and three sixes in the process.