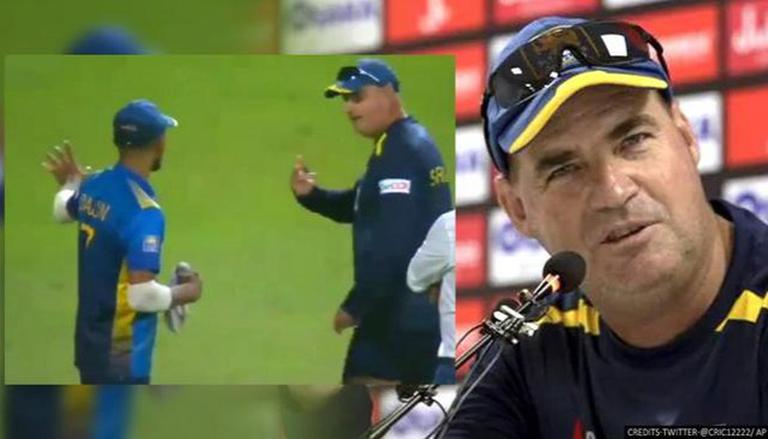 
After suffering a narrow defeat against India in the second one day international (ODI), the Sri Lankan team's head coach Mickey Arthur engaged in a heated discussion with captain Dasun Shanaka on the field. An eighth-wicket partnership between Deepak Chahar and Bhuvneshwar Kumar helped India get over the line as they chased down the target of 276 in the last over of the match. The former Pakistan head coach clearly hates losing and was animated after his side lost the series to the 'Men in Blue.' Netizens were in awe of Arthur's antics and wanted to see more of the Sri Lanka coach.

Mickey Arthur revealed his frustrations by making animated gestures while sitting in the dressing room. The Sri Lanka coach was giving instructions towards the end of the match when Bhuvneshwar Kumar and Deepak Chahar were slowly taking India to a memorable victory. One of Mickey Arthur's angry moments can be seen in one of the fan Tweets below. Arthur can be seen having a heated discussion with Dasun Shanaka after the match.

Netizens were impressed by the anger Mickey Arthur showed after Sri Lanka lost to India in the second ODI. Even though the former Pakistan head coach is known for his animated reactions, little did fans expect such anger. Few fan reactions can be seen below.

Mickey Arthur has cursed more in the last nine minutes than the entire cast of Mirzapur. #INDvSL

Mickey Arthur has come after coaching Pakistan and he's still behaving like this after a turnaround loss. Strange.

Perhaps the most hilarious reaction was from Sami Sajjad, who posted Rahul Dravid's famous CRED advertisement. Sajjad attempted to show how Mickey Arthur perhaps would have reacted to his players in the dressing room post the defeat.

Similarly, Mihir Kaslikar too mocked the Sri Lankan head coach by adding a clip, showing Arthur beating up the players post the defeat.

India clinched the three-match ODI series following their win in the second ODI against Sri Lanka. India followed up a dominating seven wicket in the first ODI by a narrow victory in the second ODI. Having already clinched the series, it remains to be seen if the Men in Blue will give an opportunity to some of their youth players for the third and final ODI. The third ODI is scheduled to commence live at 3:00 PM IST on Sunday, July 23.