After Sri Lanka's loss to India in the ODI series, Micky Arthur was seen in a furious argument with the Sri Lankan team's captain Dasun Shanaka. 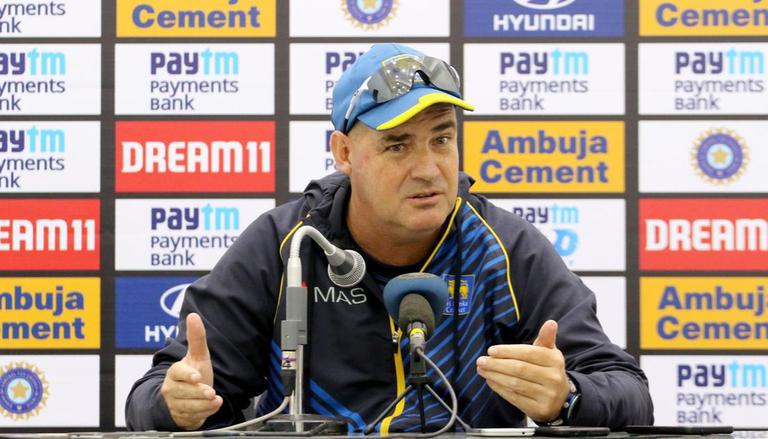 
After suffering a tough loss against India in the second one-day international and essentially handing the series to India, the Sri Lankan team's head coach Micky Arthur was seen having a heated conversation at the R Premadasa Stadium in Colombo. Arthur was seen gesturing in a frenzied manner on the field with captain Dasun Shanaka after the loss to India. The video of the two arguing on the field went viral on social media.

Former Sri Lankan cricketer Russel Arnold was quick to note the incident and tweeted about it saying that such conversations should happen in the dressing room and not out in the field.

Micky Arthur replied to the former Sri Lankan cricketer saying that the captain and he are growing as a team and they had a 'good debate' and there was nothing more to it.

Russ we win together and lose together but we learn all the time!Dasun and myself are growing a team and we both were very frustrated we did not get over the line!It was actually a very good debate,no need to make mischief out of it!

Arthur seemed to be frustrated and was seen making animated gestures while sitting in the dressing room towards the end of the game when Bhuvneshwar Kumar and Deepak Chahar were gradually taking the Indian team to a memorable victory.

India needed 16 runs to win in the last three overs and the duo of Chahar, who had smashed a brilliant fifty, and Bhuvneshwar created an unbeaten 84-run stand to guide India to a three-wicket victory with five balls to spare after they were reduced to 193/7. India with an unassailable 2-0 lead in the ODI series are now looking to whitewash with a victory in the third ODI.

Virat Kohli and co, who are currently in Durham, cheered for the Shikhar Dhawan-led team India as they defeated Sri Lanka in the thrilling second ODI. In a video posted by BCCI on Twitter, the team can be seen watching the match and cheering for the team in Sri Lanka.

From dressing room, dining room and on the bus, not a moment of this memorable win was missed. 🙌 #SLvIND pic.twitter.com/IQt5xcpHnr

The match looked down and almost out for the Indians in the chase but a steady and astute performance from Deepak Chahar and a brilliant supporting role by Bhuvneshwar made sure that India got over the line in the final over and Virat Kohli was quick to respond to that by sending his congratulations and appreciated the effort made by the boys to turn around the tough situation.

Great win by the boys. From a tough situation to pull it off was an amazing effort. Great to watch. Well done DC and Surya. Tremendous knocks under pressure. 🇮🇳