Watch Steve Smith's furious reaction after a mix-up with teammate Usman Khawaja cost him his wicket on the Day 1 of Sri Lanka vs Australia, 1st Test at Galle. 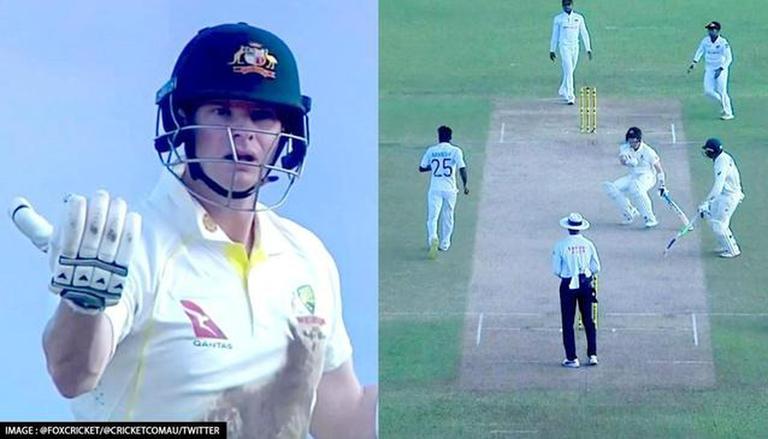 
Australian cricketer Steve Smith walked back to the pavilion on Day 1 of the Galle Test between Sri Lanka and Australia, following a horrendous mix-up with fellow batter Usman Khawaja that paved the way for his run-out. In the 20th over of Australia’s first batting innings, Lankan bowler Ramesh Mendis bowled a loopy delivery, tossed up on a length, that Smith missed while attempting a flick and ended up striking the front pad. While the home side went up with a small appeal, Khawaja called for a single as the ball went towards the point.

As Smith stepped forward for a run, Khawaja responded initially before stopping abruptly and turning him back halfway down the wicket. Smith desperately looked to return back to the crease and put a full-fledged dive, however, the quick throw from Kusal Mendis was enough for keeper Niroshan Dickwella to dislodge the ball. Reacting to his dismissal, Smith was visibly miffed as he turned toward Khawaja and raised his arms at the left-handed batter for sending him back.

Smith should have been more assertive and made the call as it was his to make but asked Khawaja to who cooked him, shouldn’t have had to cook him though as wasn’t his call pic.twitter.com/LDsqsddCEH

I think it's Smith fault . He initially said stop and then took off

He said no, and then gestures “what do you want”, therefore making khawaja make a call, that’s where he should have said yes or no instead

what was that? i can’t even tell who’s fault that was

What followed Steve Smith's dismissal on Day 1 of SL vs AUS 1st Test?

Smith’s wicket was a big blow for the visitors as it was their third wicket to fall on the first day. The match started with Sri Lanka winning the toss and opting to bat first. The hosts managed to score only 212 runs in the first innings, as Nathan Lyon contributed with figures of 5/90 in 25 overs. Mitchell Swepson also dismissed three Lankan batters, while skipper Pat Cummins and star pacer Mitchell Starc contributed with one wicket each.

Dickwella scored the maximum of 58 runs for Sri Lanka while former skipper Angelo Mathews hit 39 runs in 71 balls. The opening pair of Pathum Nissanka and captain Dimuth Karunaratne could contribute with knocks of 23 and 28 runs respectively, while the other batters struggle to get things going. Meanwhile, Day 1 closed with Australia on 98/3 with Khawaja batting on 47 individual runs, following the dismissal of Smith and Travis Head on the other end.

Earlier in the innings, Warner became Australia’s first wicket to fall as he was dismissed lbw at the hands of Mendis. After scoring 13 runs, No. 3 batter Marnus Labuschagne was the next batter to be dismissed by the same bowler. On Day 2, the play was delayed as the rain gods showed little mercy at the Galle International Stadium in Sri Lanka.