Team India batsman Suryakumar Yadav ensured that fans do not miss Sanju Samson by showing the picture of their cricketer on his mobile phone. 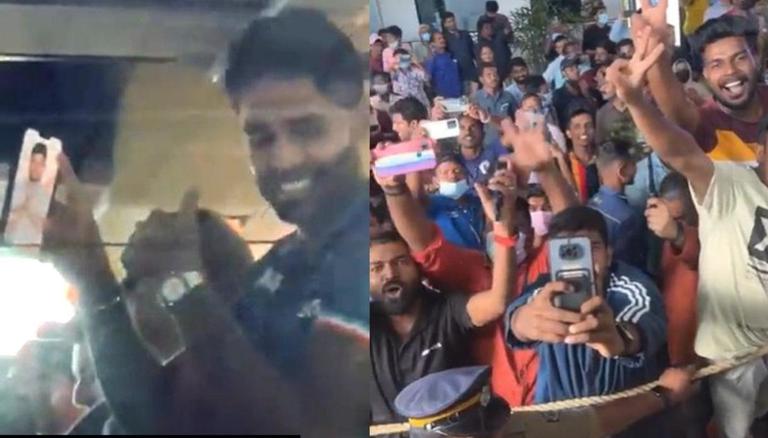 
After sealing the T20 series against Australia in Hyderabad, Team India arrived in Thiruvananthapuram to face South Africa in the first game of the three-match T20I series. The India vs South Africa 1st T20 match will take place at Greenfield Stadium on Wednesday, September 28. Before the opening match, fans in Kerala gathered at the airport to welcome their favourite cricketers while shouting Sanju Samson's name. Samson is not part of the India T20 squad for the South Africa series, but Suryakumar Yadav ensured that fans do not miss their hero with a gesture that won the hearts of fans.

In the video shared by Rajasthan Royals on their social media handle, Suryakumar Yadav is sitting in the team bus and showing the picture of Samson on his mobile phone making the fans go crazy. Royals captioned the video, "RR Admin since 2013:". Earlier, Samson's other Indian teammates R Ashwin and Yuzvendra Chahal had also shared an image of the Kerala crowd, tagging Samson in their Instagram stories.

Samson had joined the Rajasthan franchise back in 2013 and played for three seasons before heading to the Delhi franchise. He returned to Rajasthan Royals in 2018 and was named the skipper in 2021. Despite being backed by India captain Rohit Sharma earlier this year for a place in the Indian T20I team, Samson only got limited opportunities and was not picked in the squad for both Asia Cup and the T20 World Cup.

The T20I series will be a final chance for both India and South Africa to fix the problems before heading to Australia for the T20 World Cup. The upcoming series will be the third meeting between both teams in the calendar year. Back in January this year, South Africa hosted India for a three-match Test and ODI series.

The host went on to win both the series after which the Proteas travelled to India for the T20I series. The five-match T20I series ended in a draw after both the teams won 2 matches apiece, while the final match was abandoned due to rain. Ahead of the upcoming third instalment, we take a look at the schedule and the squad details.

India squad for the T20I series