R Sai Kishore finished with figures of 3/12 in 4 overs tanks to which Tamil Nadu were able to restrict Karnataka to 151/7 in Syed Mushtaq Ali Trophy final. 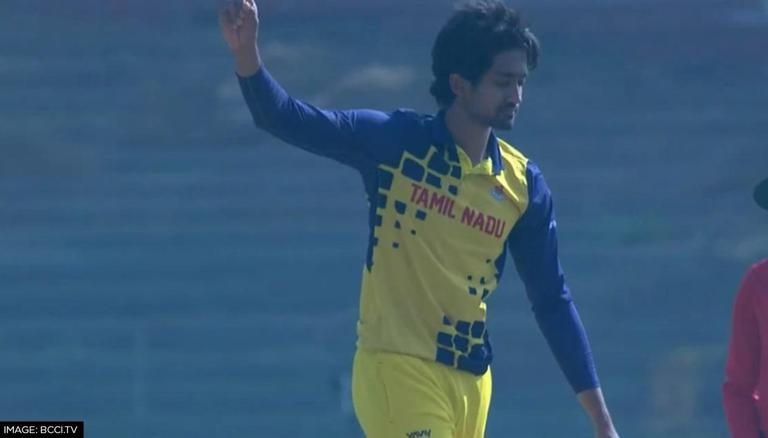 
The ongoing Tamil Nadu vs Karnataka Syed Mushtaq Ali Trophy final was expected to be a hard-fought contest between two of the strongest teams in the competition. It looked like Tamil Nadu would stamp their authority in the final match after removing Karnataka's top order but Manish Pandey led team staged a brilliant comeback to post 151/7 in their quota of 20 overs. The total could have been much bigger had it not been a fine spell from Tamil Nadu left-arm spinner R Sai Kishore during the powerplay which put Karnatak in trouble. R Sai Kishore finished with figures of 3/12 in 4 overs.

Ravi Sai Kishore got his first wicket off the first delivery of his first over. The left-arm spinner dismissed Rohan Kadam with the batsman falling for his tossed up delivery that turned sharply and went through bat and pad before crashing into middle stump. The second wicket for Ravi Sai Kishore was in the first ball of the sixth over in which he dismissed Karnataka skipper Manish Pandey. The delivery was bowled slower through the air and went straight as Manish Pandey looked to cheekily steer it past slip. However, he was beaten on the outside edge with the ball hitting the top of the off-stump.  His third and final wicket was of Karnataka wicketkeeper-batsman Sharath BR. The batsman charged down the track to a wide toss-up from the spinner, only to scoop it up towards cover, where the fielder ran back to dive and holds on to a catch.

Sai Kishore man 🤦🏻‍♂️
Should've played so many games in IPL by now. At least now with 10 teams IPL, he'd hopefully get all 16 games

Nothing against CSK but wish sai Kishore goes on to play for a team where he is a sure shot starter
Don't want him to be picked by csk again because currently he doesn't get a place , if he gets picked he should start as simple as that
Shouldn't waste his prime years on bench

R Sai Kishore is toooo good to warm the bench in IPL. He delivers time and again for Tamil Nadu in white-ball cricket. Hopefully, he gets his chances next season 🤞#SyedMushtaqAliTrophy

Recap of Tamil Nadu vs Karnataka match so far

Tamil Nadu after winning the toss asked Karnataka to bat first in the final being currently played in Delhi. Ravi Sai Kishore bamboozled the Karnataka top-order claiming wickets of opener Rohan Kadam, skipper Manish Pandey and wicketkeeper Sharath BR. Karun Nair was dismissed by Sanjay Yadav leaving Abhinav Manohar and Praveen Dubey to do all the hard work. Manohar top-scored for the team with 46 runs before being dismissed by Sandeep Warrier. Dubey was dismissed by T Natarajan for just 38 runs. Jagadeesha Suchith was the last batsman to be dismissed with a runout.