Australia won its first-ever T20 World Cup title after beating New Zealand by 8 wickets in a thrilling final on Sunday. Here's what Langer said after the win. 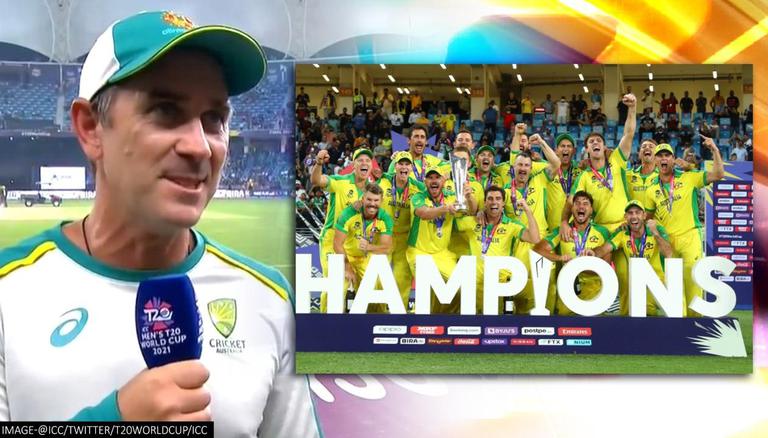 
Australian coach Justin Langer opened up about the mantra that helped his side lift their maiden World T20 title on Sunday. Langer, while speaking to Ian Bishop after the match, said the Aaron Finch-led side really "embraced fun" both on and off the field, which according to him, played a vital role in the team's success in the 2021 ICC T20 World Cup. Australia won its first-ever T20 World Cup title after beating New Zealand by 8 wickets.

"We embraced fun. In this situation where everyone talks about bubble, these guys have had so much fun on and off the ground. And in the game of cricket, it's important to have fun and enjoy it and the guys have done that. I think that was a really important part of our success here," Langer said in his post-match interview.

Australia were not the favourites to win this year's World Cup following their humiliating defeats in the West Indies and Bangladesh months before the commencement of the tournament. However, the Men in Yellow put up a shocking performance by winning four out of five games in the group stage and then defeating Pakistan in the semis to qualify for the final.

In the final, Kane Williamson helped his side post 172 runs on the board after losing the toss to Australia and being asked to bat first. Williamson put up a batting masterclass on the night of the final as he scored 85 runs off 48 balls, including 10 boundaries and 3 sixes. Martin Guptill, Glenn Phillips, and James Neesham also contributed to the total as they scored 28, 18, and 13 runs respectively. Josh Hazlewood picked three wickets for the Aussies, while Adam Zampa picked one.

Australia, on the other hand, looked absolutely comfortable while chasing down the target as they completed run chase in 18.5 overs. Australian batters David Warner and Mitchell Marsh played crucial innings as they scored 91 runs between them after the early dismissal of Aaron Finch. While Warner scored 53 off 38 balls, Marsh remained unbeaten at 77 off 50 balls. Glenn Maxwell also contributed with the bat as he hit 28 off 18 balls to finish off things for Australia.