There were shades of Kumble's heroics in Ajaz Patel's feat, peculiarly the modes of dismissal but the most significant similarity is the Rahul Dravid connect. 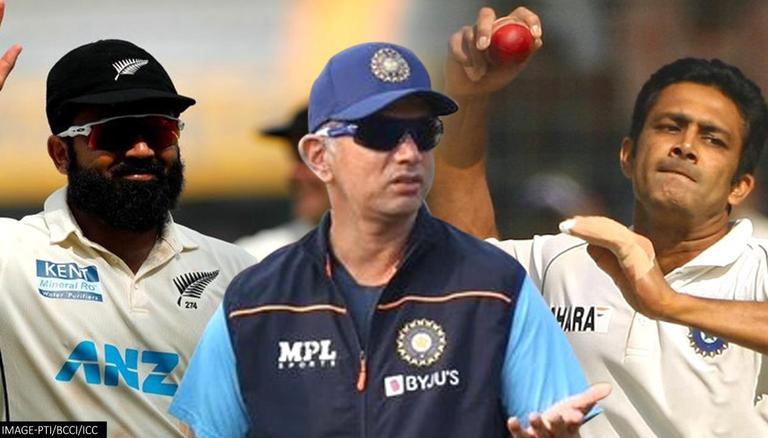 
Skittling out the entire Indian team, New Zealand's lone warrior Ajaz Patel etched his name on the history books on Saturday as he picked all 10 wickets in the first innings of the second India vs New Zealand Test at the Wankhede. At the end of the play on Day 1, Patel had said that he was 'really lucky' to be sitting in his 'hometown' with four wickets to his name, without the slightest of hints of the magic he would spin the next day.

The Mumbai-born spinner, who moved to New Zealand just when he was 8 years old, marked a terrific homecoming with a 10-wicket-haul against Team India, replicating a mighty record that Indians have proudly have boasted for the last two decades. It was Anil Kumble in 1999, against arch-rivals Pakistan, who picked up 10 wickets on the trot to hand India a blazing 210-run victory.

The likes of Inzamam-ul-Haq, Mohammad Yousuf, & others were left completely clueless by Kumble's mastery. That day in Delhi Kumble became the first Indian bowler to pick 10 wickets in an innings. Cut to 22 years later, in Mumbai, another Indian-born mirrored the feat, however, this time India was on the receiving end of the onslaught.

There were shades of Kumble's heroics in Ajaz Patel's feat, peculiarly the modes of dismissal. Patel picked 10 wickets, out of which, 5 were courtesy of a catch, 2 batters were bowled while 3 were trapped before the wicket. Kumble's 10 wickets had come exactly in the same way. However, the most interesting similarity between the two records set 22 years apart, is the Rahul Dravid connection.

The former India batter, well-known as The Wall, is possibly the only cricketer to have watched both the feats live and on the ground. In Delhi, Dravid featured as the player and teammate of Anil Kumble. In fact, Dravid also helped Kumble dismiss his 9th target, with a fine catch of Mushtaq Ahmed.

READ | IND vs NZ: BCCI has superb reaction to Kumble's 'welcome to the club' wish to Ajaz Patel

In Mumbai, 'The Wall' featured as the coach of the Indian Team that was skittled by Ajaz Patel. In both incidents, Rahul Dravid remained the humble and modest person that he symbolizes. In Delhi, Dravid celebrated alongside teammate Kumble whereas in Mumbai, Dravid appreciated Ajaz Patel's 10-wicket haul with a standing ovation alongside the Indian team from the dressing room.

Patel's 10-wicket-haul might have not been able to put New Zealand in the pole position, but has definitely managed to steal the spotlight from Mayank Agarwal's terrific 150. The world of cricket burst into celebrations as Rachin Ravindra bagged the catch of Siraj to hand over Patel his 10th scalp.

Appreciations poured from all corners of the world, including veterans of the tiny island nation, who saw Patel's achievement as their own. Significant words were tweeted by Anil Kumble, the second member of the exclusive '10-wicket club'. Acknowledging the 'special effort' by Patel, Kumble lauded the Kiwi for scoring a perfect 10 just as New Zealand walked back to the dressing room after wrapping up India's innings for 325.

Welcome to the club #AjazPatel #Perfect10 Well bowled! A special effort to achieve it on Day1 & 2 of a test match. #INDvzNZ

Interestingly, Ajaz Patel, just moments after landing in Mumbai for the second Test had said, "It is emotional. It will be a special moment for me, something I will look back on fondly in the future."

After his glorious 10 wickets on Day 2, the Kiwi spinner did not only lead the team back with the red ball, but also walked back with sweeter memories to ponder.